Notes from the Other Orders: Beetles as Pollinators

When we think about pollinators, the first species to pop into mind are usually bees, butterflies, and maybe, hummingbirds. But pollinators are a much broader group of animals that encompasses species from several groups of insects, including beetles. Beetles are an incredibly diverse group that make up the largest order (Coleoptera) in the animal kingdom. Worldwide, more than 300,000 species have been described, representing about 40 percent of known insects. Gardeners are often familiar with the beneficial pest-control services provided by ladybugs and predaceous ground beetles, but flower-visiting species like soldier beetles, scarabs, long-horned beetles, sap beetles, and checkered beetles all provide important pollination services that complement the work of other pollinators in the landscape. 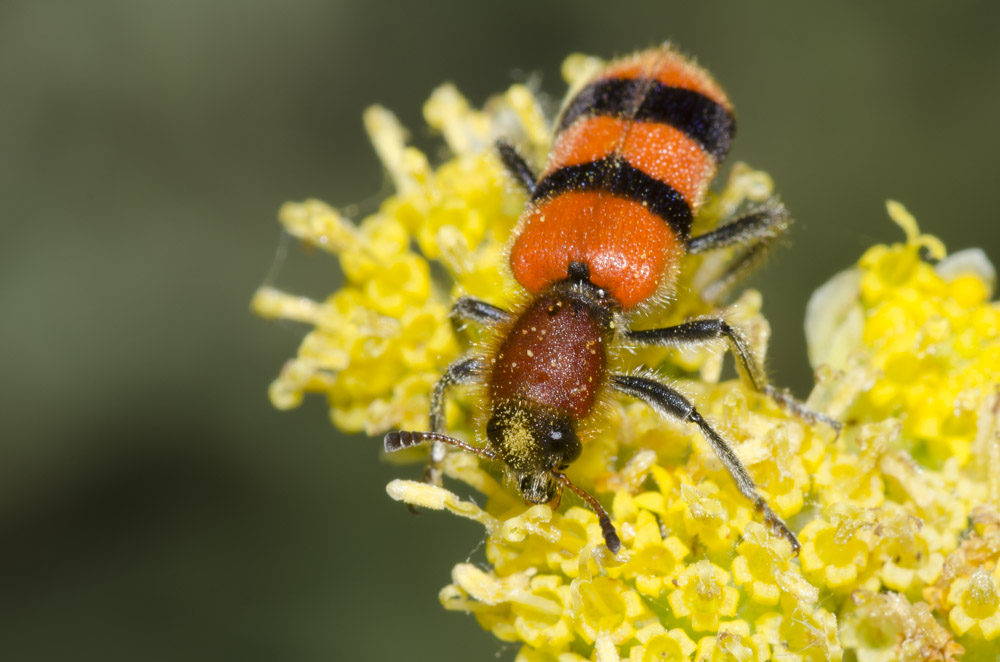 This species of checkered beetle (Trichodes bibalteatus) is found in south-central United States. Its face is covered with yellow pollen picked up while foraging.

Beetles have a long history on this planet. Fossil records show they were abundant when dinosaurs roamed the Earth during the Mesozoic Era, roughly 200 million years ago. It is possible that these early beetles played a role in the pollination of gymnosperms like cycads. When flowering plants (angiosperms) came onto the scene about 100 million years ago, bees and butterflies had not yet made an appearance. In their absence, beetles helped to shape early plant-insect pollination relationships. Because of this long history, many of the plants that are beetle pollinated today have a similarly long lineage. In fact, some of the best known beetle-pollinated plants are magnolias, themselves part of an ancient line.

There are several characteristics that are common among beetle-pollinated plants. These include large cup-like flowers that are typically open during the day, heavily scented blossoms, and leathery or tough petals and leaves. Flower colors range from white and cream to pale green or even burgundy.  Although beetles do have color vision, they rely primarily on their sense of smell to find flowers. People tend to describe flowers pollinated by beetles as spicy, sweet, musky, or fermented like overripe fruit. Because flower-visiting beetles are mostly interested in pollen as a food source, these plants must produce enough pollen to ensure some is left over for pollination to occur. Beetles do not have any specialized structures or mechanisms for picking up pollen; rather, pollen grains stick to their bodies as they move from flower to flower. They are sometimes referred to as “mess and soil pollinators” since they will eat through leaves and petals, leaving small holes, bits of plant matter, and frass in their wake. Beetle-pollinated plants have evolved to have thicker flowers and leaves in order to survive this feeding damage by beetles.

Plants that rely on beetles for pollination are more common in tropical areas, but there are a number of native and ornamental plants found in more temperate regions that also depend on beetles. In addition to magnolias, these include tulip trees (Liriodendron), paw-paw (Asimina), sweetshrub (Calycanthus), and water lilies (Nymphaeaceae). But beetles are not limited to their evolutionary cohorts. They are found visiting a wide variety of flowering plants, particularly those that produce clusters of smaller flowers like goldenrod (Solidago), spirea (Spiraea), spicebush (Lindera), yarrow (Achillea), sunflower (Helianthus), and wintersweet (Chimonanthus).

If you already have some of these plants in your yard or natural area, you are off to a great start to attracting a more diverse beetle fauna to your landscape. There are a number of other actions you can take to attract and support beetle pollinators: 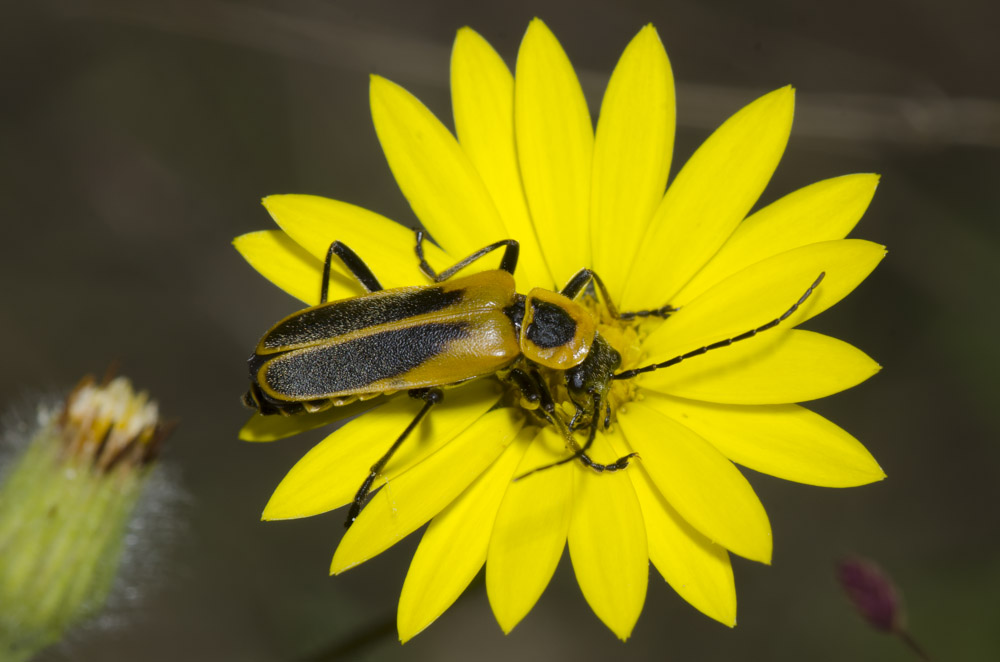 The Pennsylvania leatherback (Chauliognathus pensylvanicus), also known as the goldenrod soldier beetle, is a commonly seen flower visitor east of the Rockies. This specimen is in Oklahoma, foraging on soft goldenaster (Bradburia pilosa).

Butterfly gardening and more recently pollinator gardening have become widely adopted. Those are both great ways to help make our landscapes more sustainable and create places for wildlife. Small patches of habitat scattered across towns and cities can even help reduce the impacts of climate change. By adding beetles to the list of animals you are looking out for and helping, you can do even more to create a sustainable landscape and support wildlife in your neighborhood.

Learn about the four principals to Bring Back the Pollinators.

Guidance on planning and installing habitat for pollinators.

As the Public Lands Lead, Candace manages federal contracts focusing on the conservation and management of at-risk invertebrate species in the West. She also manages Xerces’ firefly conservation program. Originally hired as a monarch conservation specialist, Candace now works with a diverse range of taxa, including butterflies, beetles, aquatic macroinvertebrates, and freshwater and terrestrial mollusks.

Resident Monarch Populations on the Rise in California: What Does this Mean for the Western Migratory Population?