I love to hike in the Cascade mountains of the Pacific Northwest, and I’ve grown used to passing through patches of fir forests burned to white skeletons by wildfire. I certainly was not anticipating sights like these within Western Oregon’s thick and tangled low-elevation ash forests, where year-round moist soils make ignition unlikely.

But then, suddenly, the announcement came. Emerald ash borer has been spotted in Forest Grove, Oregon, the first sighting along the West coast. Emerald ash borer (Agrilus planipennis), also known as EAB, is a non-native boring insect of ash trees (Fraxinus spp.), notorious for having killed millions of ash trees across the U.S. in the last 20 years. First discovered in Michigan in 2002, EAB has since spread to 36 states and the District of Columbia.

Emerald ash borer is not the first invasive species to cause serious harm to trees and forest ecosystems in America, nor is it likely to be the last. One hundred years ago, chestnut blight wiped out the majestic native American chestnuts in the eastern U.S. Although the species survives, it is considered “functionally extinct” because regenerating trees eventually succumb to the blight. Other diseases and insects have marauded across large portions of the country, too. The hemlock woolly adelgid in Eastern hemlock and Dutch elm disease are two well-known examples.

The discovery of EAB in Oregon — and other recently afflicted states such as Vermont and South Dakota — merits serious attention and a strategic response on the part of forest and streamside managers, city and park managers, property owners, and others. Our task is not just to protect ash trees and to try to stop or slow the spread to adjacent states, but also to increase the ecological health and resilience of our forests.

The Ecological Values of Ash Trees

Ash trees are widely distributed across eastern North America, and many ash species tend to be associated with riparian and wetland areas. Oregon’s native ash (F. latifolia) occupies a similar niche, inhabiting riparian corridors and forested wetlands throughout the Willamette Valley and lower elevation foothills of the Cascade and Coast Range mountains. In towns and cities across the country, ash trees are common street and landscape trees.

Ash trees are valuable ecologically. In the U.S., we know of 98 species of insects that are ash-dependent, but nearly three times that many are associated with ash trees. The caterpillars of nearly 150 species of moths and butterflies can feed on ash leaves; ash are especially important to sphinx moths. In turn, these caterpillars are significant food for birds, especially nestlings. Although ash trees are wind pollinated, some native bees make heavy use of this pollen when establishing nests, and honey bees also collect ash pollen to a limited extent.

Because of their association with riparian areas, ash trees also contribute to watershed function by stabilizing streambanks, filtering pollutants, and providing autumn leaf litter used by aquatic invertebrates in streams and rivers.

Landowners may wonder if they should remove live ash trees before death makes removal more hazardous, or treat trees regularly with insecticide to hold the borer at bay. But removal or treatment of every ash along thousands of miles of stream corridors or even across thousands of properties in urban areas is simply infeasible. Even if funds were available, these options do not negate and may even increase the potential for widespread ecological damage.

Insecticide treatments help ash trees to survive, but potentially at a cost to native insects that feed on ash trees. Four systemic insecticides are currently available to kill larval and adult EAB: emamectin benzoate, imidacloprid, dinotefuran and azadiractin, each toxic to a wide array of insects. These chemicals migrate to ash leaves after application, with concentrations generally measuring around 1,000-10,000 parts per billion (ppb) in the first couple months post-treatment (McCullough et al. 2011; Grimalt et al. 2011; Mwangola 2022).  Leaves from trees treated 6-8 weeks earlier with emamectin benzoate killed all cecropia moths within 3 days (mean concentrations measured 2990 ppb). While residues of emamectin benzoate declined to a mean of 150 ppb after 14 months, leaves with these concentrations fed to prometha caterpillars still resulted in 100% mortality within 6 days (Mwangola 2022). In contrast, trees treated with azadiractin exhibited much lower concentrations in leaves and killed only about half of exposed cecropia caterpillars. Azadiractin effects to promethea caterpillars were obscured by high mortality of controls.

“Trap Trees” May Slow the Spread of Emerald Ash Borers

The first method involves using small pockets of girdled ash trees (where a ring of bark is removed to kill the tree) to preferentially draw in egg-laying females, since the chemicals released by girdled trees are attractive to adult beetles. These “trap” trees are then destroyed before larvae can complete their development and emerge the following summer. Using girdled trees in recent infestations can slow the rate of EAB population growth and even slow the spread.

The second strategy involves treating a percentage of trees across the target area with systemic insecticides. Tested in Michigan with emamectin benzoate, this strategy effectively reduced EAB larval populations within the area and also improved the vigor of untreated trees, even though treated trees comprised only 1% of the ash population (Mercader et al. 2015).

These approaches can also be used together, injecting emamectin benzoate directly into girdled trees (creating “lethal trap trees”) or into ungirdled ash trees near pockets of 3-4 girdled ash trees (McCullough et al. 2016). This sort of “attract and kill” strategy has been common in agriculture for years, helping to suppress pest populations while limiting large-scale annual application of insecticides.

A similar approach was studied within towns and cities in Minnesota, to determine whether proximity to treated trees was associated with canopy preservation in untreated trees over 4 years. The study found that treatment of 50% of the ash trees maintained or improved crown health of both treated and untreated trees, regardless of whether the treated trees were injected with emamectin benzoate or azadiractin. Benefits appeared to extend to distances beyond 100 meters (Mwangola 2022). These results are consistent with a simulation performed for urban areas (McCullough and Mercader 2012). 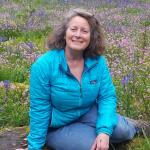 Sharon assists Xerces staff, partners, and the public to reduce reliance on pesticides and understand pesticide risk to invertebrates. Sharon previously worked at Northwest Center for Alternatives to Pesticides, the U.S. Fish and Wildlife Service, and the U.S. Forest Service, and integrates her focus on pesticides with her experience managing natural areas and agricultural lands. Sharon earned a master's of science in energy and resources and a bachelor of arts in biology, both from the University of California, Berkeley.