During the 24th Western Monarch Thanksgiving Count, nearly 100 volunteers donned their masks and practiced social distancing to carefully survey groves of trees on the California and Northern Baja coast for monarch butterflies. Despite the challenges of conducting field work during a pandemic, volunteers surveyed 246 sites, three more sites than last year. Unfortunately, to the surprise and dismay of many, only 1,914 monarchs were counted at all the sites. This is a shocking 99.9% decline since the 1980s.

The Western Monarch Thanksgiving Count has been done every year since 1997. It happens during the three-week period centered on Thanksgiving and is coordinated by the Xerces Society and Mia Monroe. It is the primary way that the migratory western monarch population is assessed and has built up a body of data than demonstrates the long-term collapse of the monarch migration in western North America.

Western Monarch Thanksgiving Count Data 1997-2020 shows that despite a strong volunteer effort, monarch numbers are at the lowest point recorded since the count started in 1997.

Iconic and beloved monarch overwintering sites like Pismo Beach and Natural Bridges reported only a few hundred monarchs during the count. More startling, Pacific Grove, which goes by the name “Butterfly Town, USA” because of its overwintering sites, had no monarchs at all. Each of these sites normally host thousands—in some years, tens of thousands—of butterflies during the winter months, and are locations where visitors travel to experience the marvel of glittery orange monarch clusters.

We had indications that there might be a significant decline this year. In 2017, when monarch populations were still in the hundreds of thousands, researchers used Thanksgiving Count data to develop a population viability analysis and posited that the extinction threshold for the western monarch migratory population was 30,000 butterflies. It seems that, unfortunately, this prediction was right. The 30,000-butterfly threshold was reached during the last two years (2018 and 2019), and the population has crashed further this year. We may be witnessing the collapse of the western migration of monarch butterflies. A migration of millions of monarchs reduced to two thousand in a few decades.

The decline of the monarch isn’t just happening in the West. During the spring and summer, monarchs reach towns, cities, and rural areas across the Lower 48, making it probably the country’s most widely recognized butterfly. However, sightings are not as common as they once were. The eastern migratory population has also declined by more than 80% since monitoring began in the 1990s.

The monarch may be America’s best-known butterfly. In December 2020, the U.S. Fish and Wildlife Service announced that, despite significant losses in numbers, it would not protect the monarch under the Endangered Species Act. (Photo: Jennifer Hopwood.)

The monarch has declined so much in North America, that in 2014 the Xerces Society and our conservation partners, including Center for Biological Diversity, Center for Food Safety, and the late Dr. Lincoln Brower, submitted a petition proposing listing the species under the U.S. Endangered Species Act. Six years later, on December 15, 2020, the U.S. Fish and Wildlife Service announced that listing the monarch butterfly under the Endangered Species Act was “warranted but precluded by higher priority actions.” In making this decision, the USFWS agrees that monarchs are threatened with extinction—especially the western population, which is in critical condition—but unfortunately did not provide the protection that they so desperately need to recover.

The monarch faces many threats including the loss of milkweed and other flowering plants across its range, degradation and loss of overwintering groves in both coastal California and Mexico, and the widespread use of pesticides in the environment. Many of these stressors are exacerbated by the effects of climate change.

Although the USFWS’s decision to not protect the monarch is disappointing, the warranted but precluded determination makes it a “candidate” species, which does provide some positive benefits in the near term. As a candidate species, it may be more often included in project planning and review on lands managed by federal agencies. In addition, there will be even greater incentives for voluntary commitments by the private sector such as the transportation and rights-of-way monarch CCAA. The warranted but precluded finding may also lead to additional funding for monarch conservation from public and private entities.

Monarchs in western North America, the population that overwinters in California, have declined dramatically in recent years. This photo was taken in 2010 at Point Lobos. The trees in many overwintering sites are now bare of butterflies. (Photo: Xerces Society / Candace Fallon.)

Why can’t western monarchs be given protection sooner?

Unfortunately, the Endangered Species Act treats insects and other invertebrates differently from vertebrates such as mammals, birds, and fish. The ESA allows species, subspecies, or “distinct population segments” of vertebrates to be listed (protected). In contrast, only an entire species or subspecies of invertebrate can be listed. This means that regional populations of vertebrates—grizzly bears in greater Yellowstone or orcas in the Puget Sound, for example—can be given protection even if the entire species or subspecies is not protected, but the western population of monarchs that migrates to California cannot because it is not a subspecies.

While we are glad that the USFWS has recognized that protecting monarchs under the ESA is warranted, this butterfly—especially the western population—needs immediate conservation action. With the current decision, the status of monarchs will be reevaluated annually, and if the status does not change significantly, they are scheduled to be listed as threatened under the ESA in 2024. In the meantime, no legal protection for monarchs or their habitat will take effect. This is particularly troubling for western monarchs whose overwintering habitat in coastal California continues to be destroyed and degraded. Also troubling is the recent ruling by a judge in California that determined that insects, including monarchs, are ineligible for protection under the state’s endangered species act.

Visit www.savewesternmonarchs.org to learn more about what western monarchs need and how to help.

The work to recover monarchs remains. The Xerces Society will continue to pursue protection for the monarch and will maintain and expand our efforts to protect, restore, and create habitat across the country. Our staff will work hand-in-hand with farmers and ranchers to find practical solutions to restore and manage pollinator habitat on working landscapes. We also work with managers of roadsides, energy infrastructure, forests, and grasslands to enhance current habitat as well as create new habitat areas. We’ll be collaborating with community scientists and enthusiasts, other nonprofits, and researchers to magnify each individual's efforts.

Because the monarch is such a widespread butterfly that can be encountered in parks and gardens, on farms and roadsides, on college campuses and coffee shop patios, it is an animal that connects us all—and there is something that each of us can do to be part of the solution. Visit our website to learn more about monarchs and how to help. 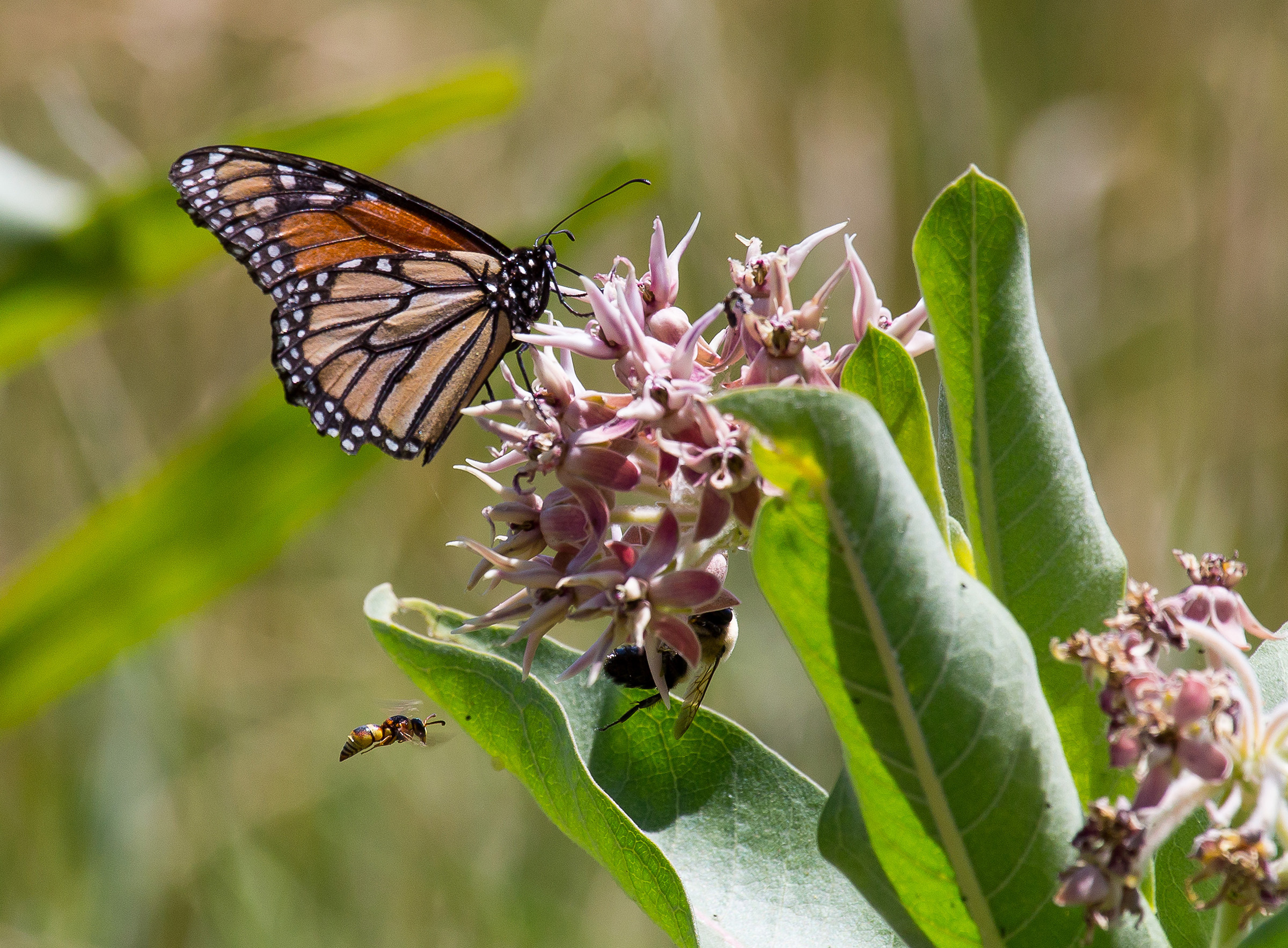 Because the monarch is a widespread species, it can turn up almost anywhere in the US, and there are actions that any of us can take to help it. Planting native milkweed, such as the showy milkweed in this photo, is a valuable step. (Photo: USFWS Midwest, Flickr.)

Actions you can take

Plant native. Planting native species of the monarch caterpillar’s sole host plant, milkweed, is a wonderful way to support monarchs. The Xerces Society’s website has information about species native to your area and where to purchase seeds.

Plant nectar. Planting blooming plants which provide nectar in the spring, summer, and fall is another great way to support monarchs and other pollinators. Check out these regional nectar plants lists to find out which native flowers are best for your area.

Plant pesticide-free. Learn more about why avoiding toxic pesticides is more important than ever.

Contribute to community science. Report monarch and milkweed sightings to projects such as Xerces’ Western Monarch Milkweed Mapper (if you live west of the Rockies) and Journey North. Or commit to regular monitoring of a milkweed patch through the Monarch Larva Monitoring Project or Integrated Monarch Monitoring Program. Request a free OE parasite test kit through Project Monarch Health.

Learn and spread the word. Getting your neighbors or community involved will bring even greater benefits for monarchs. Talk with your neighbors about why you are growing milkweed and nectar plants. Explain to your HOA why flower-rich gardens are important. Encourage your parks department or city to plant habitat and change landscaping to feature native plants. Lead the way in making your community a Bee City USA affiliate.

Monarch rearing: There are so many things that can help monarchs such as planting and improving habitat, but we do not recommend monarch rearing as a conservation strategy. Rearing a few butterflies for personal enjoyment or education is a great way to admire these impressive animals, but what monarchs really need is protected overwintering habitat and high quality flower- and milkweed-rich habitat free from pesticides and disease.

California-specific actions: With the western population at such a critically low level, work to improve monarch habitat in California is more important than ever. Protecting overwintering sites from destruction and increasing both milkweed and nectar habitat within the monarch’s first stopover zone—the region where the first generation of monarchs go after leaving overwintering sites (shown in pale blue in the map below)—are two of the highest priority actions that can be taken. To determine what actions are most appropriate for different regions of California, please consult this map.

Learn more about the Thanksgiving Count by exploring westernmonarchcount.org

U.S. Fish and Wildlife Service Q&A about the decision: https://www.fws.gov/savethemonarch/FAQ.html