Western Monarchs: Notes from the Field

After the sudden and shocking crash in the number of monarchs overwintering in California during the winter of 2018–2019, many people—including all of us at Xerces—have been anxiously watching for monarchs across the West this breeding season, hoping to see the butterflies bounce back.

In fact, staff from the Xerces Society and our partners have been keeping close eyes on the population at study sites in California, Nevada, Oregon, Washington, and Idaho as part of a multi-year collaborative research project with Washington State University and Tufts University. We now have three years of data at the same study sites to quantify whether or not 2019 is a relatively “good” year in the breeding grounds—an imperfect, but vital snapshot of the population.

So what are we seeing? While we’re still busy in the field collecting data for a few more weeks and vetting data that volunteers send our way, here are some impressions from our study sites this season.

Monarchs expanded out from the overwintering sites into their main breeding range more slowly this spring, reaching breeding areas roughly a month later than usual. There was actually a marked difference in their expansion rates in 2018 and 2019 compared to the early 2000s and 2010s. Check out this animation to see the difference for yourself. The animation was created by Collin Edwards, a post-doc at Tufts University, using records from our field studies and those submitted by many others through Xerces’ Western Monarch Milkweed Mapper.

At our California field sites, we’ve seen immature monarchs (eggs, caterpillars, and chrysalises) in densities much lower than 2017 and 2018, but higher than we expected considering the small numbers going into the spring. Monarch breeding started in May in Northern California, and extended through to our latest surveys in late September. We expect monarch breeding may continue through October where milkweed is still growing in the Central Valley and southern California. In southern California, we’ve also observed that adult monarchs have begun showing up along the coast near overwintering sites in late September, suggesting the migration is well underway in the West.

In Nevada, we've seen immature monarchs at densities lower than in 2017, but higher than in 2018. Monarch breeding in Nevada started much later than previous years, beginning in June and continuing until our latest survey in late September. Milkweed is still green in many areas, but is beginning to senesce quickly as nighttime temperatures are dropping and days are getting shorter. Narrowleaf milkweed is the only milkweed species still green at our Nevada survey sites.

In Idaho, immature and adult monarchs were observed at much lower densities than 2017 and 2018. Immatures and adults were seen from June through August. In September, most of the milkweed at our survey sites had died back for the year, or was yellow and senescing quickly. It is safe to assume that adult monarchs have left Idaho and are en route to overwintering sites.

We haven't seen any immature or adult monarchs at our study sites in Oregon this year, but monarchs have been reported at other locations around the state in very low numbers—much lower than in 2017.

The number of monarch sightings in Washington is lower than in 2017 and 2018; there have been no immature monarchs, and only two adults at our study sites in Washington. This is much lower than normal for this area.

Beyond this research project, monarchs have been reported to community science programs such as the Western Monarch Milkweed Mapper, Journey North, and iNaturalist. The map below shows a preliminary snapshot of vetted monarch sightings (adults and eggs, larvae, and pupae) reported in the West in 2019 from these three data sources. You can also watch these sightings unfold month by month in this animation.

While it is promising to see small numbers of monarchs across a portion of the western breeding range, the density and extent of monarch breeding remains very low. Monarchs were especially scarce in the northern reaches of their breeding range in Oregon and Washington, with many areas where monarchs typically breed left unvisited.

Returning to the overwintering sites

Just after the fall equinox, we started receiving reports of small numbers of monarchs arriving at some of the major overwintering sites in California. Mia Monroe, co-coordinator of the Xerces’ Western Monarch Thanksgiving Count, noted that monarch sightings are up in San Francisco. One local volunteer recently witnessed 10 butterflies heading south across the Golden Gate Bridge. Another reported over 50 monarchs at an overwintering site in Bolinas, just north of the bridge.

The largest clusters (700–800 butterflies) have been reported by Samantha Marcum of the US Fish and Wildlife Service from overwintering sites in Santa Cruz at Lighthouse Field and Natural Bridges state beaches. Further south, more monarchs have been seen by Xerces staff near the overwintering sites at Vandenberg Air Force Base and a baker’s dozen of monarchs were spotted clustering at Ellwood sites by Charis van der Heide, a regional coordinator of Xerces’ Western Monarch Thanksgiving Count.

Also, Monarch Butterflies in the Pacific Northwest reported this season’s first recoveries of tagged monarchs in California. All three of the butterflies were tagged and released in Brookings, Oregon, in September. One was observed in a garden in Oakland on September 25; another was spotted at Natural Bridges State Beach, Santa Cruz, on October 6th; and the third in mid-October in Boulder Creek.

Let’s hope favorable fall conditions help more monarchs to arrive over the next month or so and together, we will all eagerly await the Western Monarch Thanksgiving Count results! 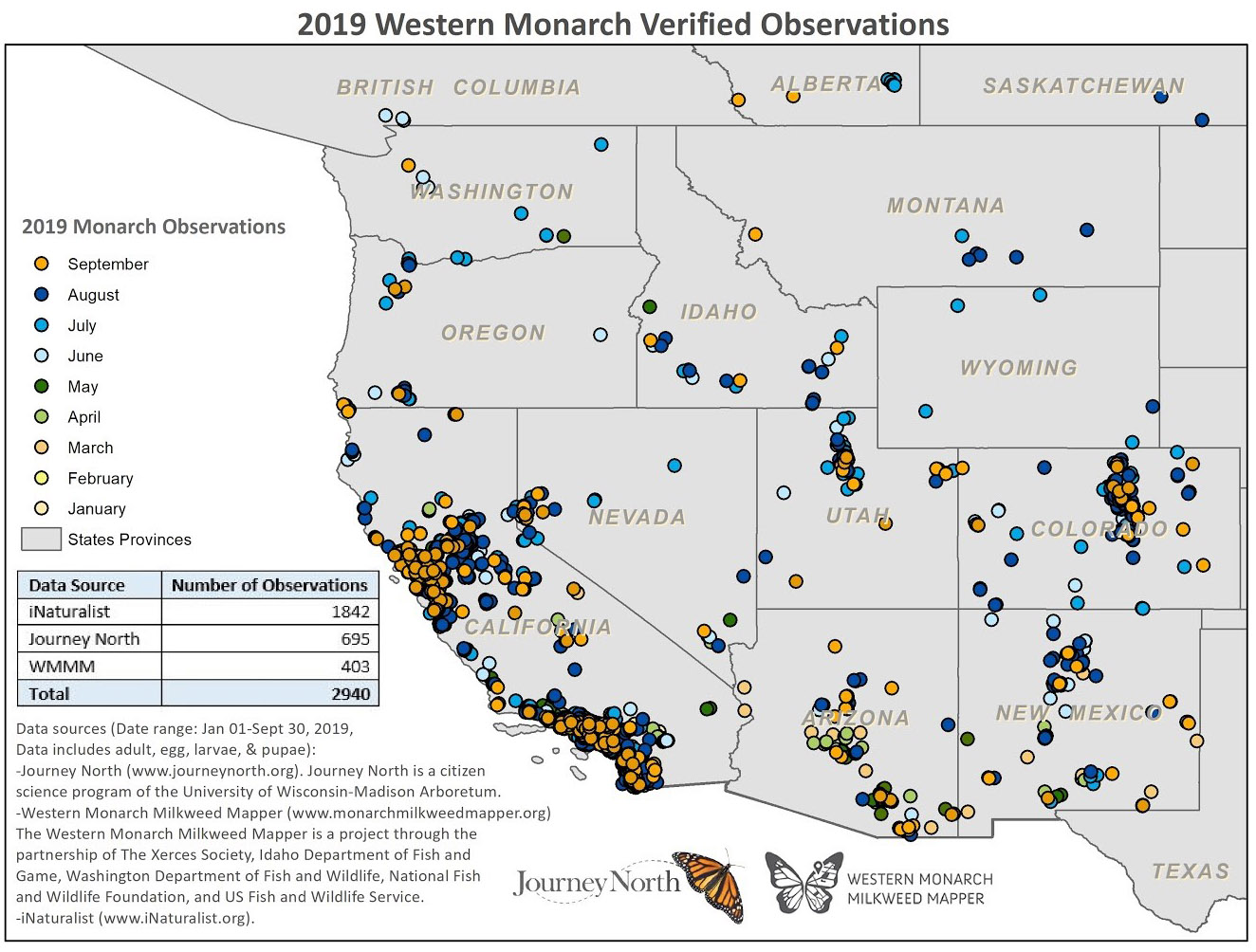 The good news is that there are simple concrete steps we can all take to help save the species. These steps were outlined in the Xerces’ Western Monarch Call to Action released earlier this year in response to the staggering decline seen in last winter’s numbers.

Two key things that you can do right now:

1. Plant monarch nectar plants and native milkweed (if appropriate to your area; milkweed is generally not appropriate in coastal CA). Plus, fall is a great time to plant natives!

2. Participate in community science programs to track the migration as monarchs leave their breeding grounds for California and Mexico. We are particularly interested to hear when monarchs start arriving at their overwintering sites in California!

Thank you to our partners in the monarch breeding phenology study undertaken with Washington State University and Tufts University: Elizabeth Crone, Cheryl Schultz, and Cameron Thomas as well as David James and staff of the Department of Defense. Funding for the field study project is provided by the Department of Defense Legacy Program and the US Fish & Wildlife Service. Thank you to Nancy Sheehan at the University of Wisconsin for permission to share records from Journey North. And, most importantly, thank you to the many volunteers who submit monarch and milkweed sightings to community science projects and make so much of our understanding of monarchs possible!

Learn more about our work to protect monarchs

Read about our efforts to recover western monarchs

Managing for Monarchs in the West

Saving Seeds Can Be an Easy Way to Grow Pollinator Habitat