Neonicotinoid insecticides are now the most widely used class of insecticides in the world. While they were initially introduced as less harmful than older insecticides, research has now shown their devastating ecological impacts. Neonicotinoids are very toxic to pollinators, beneficial insects, and aquatic invertebrates. Their widespread use, combined with their water solubility, means that they are now often found in water and soil samples throughout the country. The Xerces Society is working to reduce the use of neonicotinoids in both agricultural and urban areas.

Neonicotinoids are a group of insecticides used widely on farms and in urban landscapes. Although less acutely toxic to mammals and other vertebrates than older insecticides, neonicotinoids are highly toxic in small quantities to bees. The impact of this class of insecticides on pollinating insects is a cause for concern. Because they are systemic chemicals absorbed into the plant, neonicotinoids can be present in pollen and nectar, making them toxic to pollinators that feed on them. The potentially long-lasting presence of neonicotinoids in plants makes it possible for these chemicals to harm pollinators even when the initial application is made months before the bloom period.

An emerging threat to our waterways is neonicotinoid contamination. Although introduced with the premise of being less harmful to humans and wildlife than older insecticides, neonicotinoids, which are readily transported to surface water, are putting aquatic invertebrates, that form the foundation of thriving rivers and streams, at risk. Learn about protecting waters from pesticides here.

How Neonicotinoids Can Kill Bees 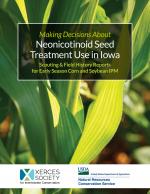 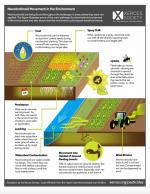 Neonicotinoid Movement in the Environment

Neonicotinoids in Your Garden 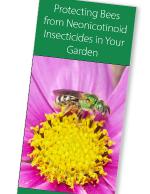 Protecting Bees from Neonicotinoids in Your Garden

Examining the impacts of pesticides on invertebrates

The IPI database contains summaries of research articles on pesticides, their effects on invertebrates, and pesticide movement in the environment. Articles have been reviewed and summarized to highlight key findings by Xerces Society staff.