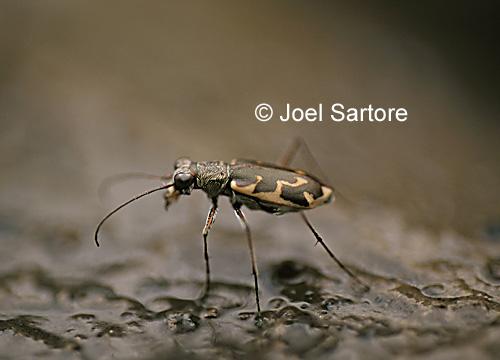 (Photo: Joel Sartore. Please contact the Xerces Society for information on how to obtain permission to use this photo)
U.S. State
Nebraska
Description

On April 6, 2010, the U.S. Fish and Wildlife Service designated 1,933 acres of Critical Habitat for the Salt Creek tiger beetle, despite the fact that a panel of scientific experts recommended that 36,906 acres be designated as Critical Habitat to adequately conserve the species. In response to this designation, on December 16, 2010, The Xerces Society and partners filed a formal Notice of Intent to Sue the U.S. Fish and Wildlife Service and requested that the Service revise their Critical Habitat decision. Read more about this action.

The Salt Creek tiger beetle is considered an “indicator” species. Its presence signals the existence of a healthy saline marsh – the groundwater feeding these wetlands pass through rock formations containing salts deposited by an ancient sea that once covered Nebraska. Over the past century, more than 230 species of birds have been reported using eastern Nebraska saline marshes, including the least tern, piping plover, and peregrine falcon. These saline wetlands are also home to several salt-adapted plants that are found nowhere else in Nebraska. Included in this flora is saltwort, which is listed as endangered under the Nebraska Nongame and Endangered Species Conservation Act. In addition, a healthy saline marsh provides numerous benefits for people, including water purification and flood control.

The Salt Creek tiger beetle, Cicindela nevadica lincolniana, has distinctive markings and is metallic brown to dark olive green above with a metallic dark green underside.

The Salt Creek tiger beetle is an active, ground-dwelling, predatory insect that captures other arthropods in a ”tiger-like” manner by grasping prey with its mandibles (mouthparts).

The beetle is only found in a few remnant saline marshes near Lincoln, Nebraska. The salt creek tiger beetle is one of the rarest insects in the world and occupies one of the most restricted ranges of any insect in the United States.

Since the late 1800s, over 90 percent of the Salt Creek tiger beetle’s saline marsh habitat has been destroyed or severely degraded through commercial, residential, industrial, and agricultural development and road projects. Only 122 acres of habitat remain, of which merely 15 acres can be considered “not highly degraded.”

The remaining populations of Salt Creek tiger beetles are threatened by:

Because of its small population size and limited habitat, the beetle is also more prone to extinction from catastrophic environmental events such as floods, drought, predation, and parasites.