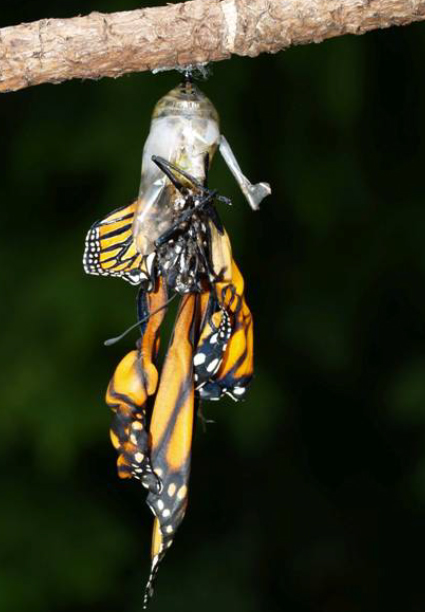 Wild monarch butterfly populations have declined by an estimated 90% in the past two decades, due to habitat loss primarily in the Midwestern U.S., where these migratory butterflies spend the summer months. Monarch butterflies are routinely purchased from commercial growers for release at weddings, funerals, and other celebrations, and to raise in classrooms and exhibits for educational purposes. Out of concern for monarch conservation, some private citizens are also rearing hundreds to thousands of monarchs in backyard operations for release into the wild.

While it has been suggested that releasing large numbers of captive bred monarch butterflies into the environment could help increase monarch numbers, the scientists who authored this statement caution against this practice.

“While many people who release mass-reared monarchs into the wild are trying to help the population, this practice may actually do more harm than good,” said Dr. Karen Oberhauser, a professor at the University of Minnesota and a leading monarch researcher. “Farmed monarchs could spread diseases to wild monarchs, be less fit to survive in the wild, and disrupt our ability to study monarchs and their movements.”

At a time when monarch populations are at record low numbers, research that informs conservation is absolutely critical. For example, scientists are trying to understand how monarchs may respond to changes in climate and habitats. When monarchs are observed at unusual times of the year, it is not possible to know if the butterflies were purchased and released, or if they arrived on their own. In the western U.S., scientists are currently identifying the key areas where wild monarchs breed to guide restoration and enhancement efforts. Releasing farmed monarchs into the wild can directly interfere with that research.

Mass production of monarchs in captivity can facilitate the spread of disease to wild monarchs. For example, higher levels of common diseases can build up in captive rearing settings, pathogens can evolve higher virulence in captivity, and diseases can be introduced to new areas when humans move monarchs to areas where they may not naturally go. Currently, there are no requirements that commercial butterfly breeders or others who raise captive monarchs follow disease preventing protocols, nor are there government agencies that routinely tests commercial monarchs for diseases.

“Disease can build up in farmed monarchs, which can then spread to wild butterflies,” said Sonia Altizer, a professor at the University of Georgia and leading researcher on monarch diseases. “Even monarchs that survive to adulthood can still carry and spread infections, placing already reduced populations of wild monarchs at greater risk.”

Pictured: A monarch butterfly infected with OE may not be able to eclose from its chrysalis, or may emerge with wings that cannot extend and flatten. (Photo: Dara Satterfield / Project Monarch Health)