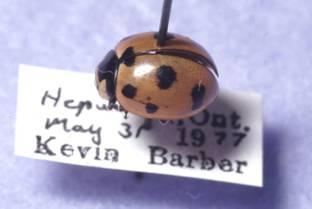 (Photo by Stephen A. Marshall. Please contact the Xerces Society for information on how to obtain permission to use this photo)
Description

Coccinella novemnotata is commonly known as the nine-spotted lady beetle, nine-spot ladybird beetle, or the popular common name for the family Coccinellidae, ladybug. It is also known by the abbreviated common name C-9, after its genus and 9 spots.

In 1989, New York designated the nine-spotted lady beetle as the state insect. It was then believed to be one of the most common and important lady beetles in agricultural areas in New York and the Northeast; today it seems to be extirpated (made locally extinct) within the state, and it occupies only a tiny fraction of its former range across the United States and southern Canada. Recent surveys have found none in the Northeast, and only a few in the Midwest and West. Although the nine-spot’s decline was recent, little is known about why it vanished. Non-native lady beetles may have brought disease, eaten prey used by the nine-spot, or even eaten the nine-spot itself. The exact cause of the demise of the nine-spotted Lady beetle remains an unsolved mystery.

The C-9 and related species in the family Coccinelidae are widely used for pest control in agricultural settings. They are effective natural predators on many Homopteran pests, such as scales and aphids (Pack 1925), and other pest insects.

They are, however, sensitive to fluxes in natural enemies, and to habitat degradation. Because of their sensitivity, they are useful indicators of ecosystem health (Stephens and Losey 2003).

The C-9 was historically abundant throughout its range, across the U.S. and throughout southern Canada. It was once the most commonly encountered coccinellid in the northeastern U.S. (Gordon 1985). The C-9 and one other native coccinellid, Adalia bipunctata, have experienced much greater decline than other native coccinnelids, and there has been an overall decrease of 68% in native coccinellids since 1986 (Harmon et al.2007). Populations of the C-9 began to decline rapidly in the mid-1980s (Obrycki et al. 2000), and it is now rare throughout its historic range. The C-9 was last collected in 2006 in Virginia by two young children (Stephens 2006); a previous collection was made in 1992 in the northeastern U.S. Extensive surveys recently conducted in New York State and throughout the northeast found no individuals.

The 9-spot is the state insect of New York, but this designation has not led to regulations to protect it or its habitat.

The cause of the decline of the nine spotted lady beetle has not been pinpointed, although there are two likely hypotheses: the succession of farmland in the northeastern U.S., and the establishment of non-native coccinellid species (Harmon et al.2007).

An increase in forested area in the northeastern U.S. may have actually harmed populations of the C-9. Much agricultural land in the region has been abandoned as operations have shifted to the midwest, and open landscapes that provided good habitat for the C-9 and their insect prey have re-grown with forests. Thus, the reforestation of the northeast may have contributed to the decline of the C-9 (Harmon et al.2007).

Conservation efforts for the C-9 should focus on increased monitoring in order to locate remaining populations. Cornell University runs a citizen science monitoring program, the Lost Ladybug Project, that encourages citizens to search for the C-9 and report any findings.