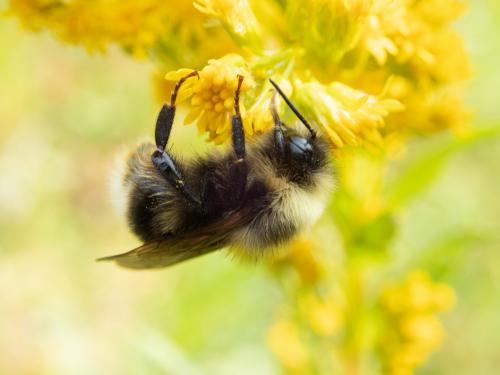 Historically broadly distributed in western North America. Bombus occidentalis occurs along the Pacific coast and western interior of North America, from Arizona, New Mexico and California, north through the Pacific Northwest and into Alaska. Eastward, the distribution stretches to the northwestern Great Plains and southern Saskatchewan.

In order to properly identify bumble bees, you need to first determine whether the bee you are examining is male or female.

Some scientists consider Bombus occidentalis (the western bumble bee) to be the same species as Bombus terricola (the yellowbanded Bumble bee), whereas others consider them to be two separate species. On this website, we treat these bees as two separate species. Bombus occidentalis has many different color variations. On this page, we discuss the characteristics and distribution of the three most common color variants. There are many intermediate combinations of these three color forms that may also be encountered. The first color variant is found from northern California, north to British Columbia and east to southwest Saskatchewan and to Montana. This color variant has yellow hair on the front part of its thorax. The first through the basal section of the fourth abdominal segments have black hair. The lower edge of the fourth abdominal segment and segment 5 are whitish. The sixth segment often has sparse, whitish hairs, but may still appear black because the bee’s black exoskeleton shows through the hairs. In some cases, the sixth segment may instead appear to be whitish. Their hair is entirely black on the head. A second color variant of B. occidentalis is found along the central coast in California. It differs from the first in having yellow hair on the sides of the second abdominal segment and all of the third and reddish brown hair on segment five. A third variety of B. occidentalis is found from the Rocky Mountains to Alaska. It differs from the first in having yellow hair on the thorax behind the wings and yellow on the rear of the second and all of the third abdominal segments. Coloration of males is similar except that males have pale yellowish hair on the front of the face and the top of the head has pale yellowish hairs in the middle, with a few black hairs on the sides.

Similar female bumble bees that occur in northern California to British Columbia are B. caliginosus, B. vandykei, B. vosnesenskii, B. californicus, B. insularis, B. fernaldae, and B. suckleyi. All of these bees have yellow hairs on the fourth abdominal segment (or apex of the third abdominal segment in B. vandykei), whereas B. occidentalis in that region does not. In addition, B. caliginosus, B. insularis, B. vandykei, and B. vosnesenskii all have prominent yellow hair on the face, as opposed to B. occidentalis with all black hair on the face. Bombus californicus also has black hair on the head, but can be distinguished by the yellow hair on its 4th abdominal segment.

All bumble bees belong to the genus Bombus within the family Apidae. The family Apidae includes the well-known honey bees and bumble bees, as well as carpenter bees, cuckoo bees, digger bees, stingless bees, and orchid bees. B. occidentalis belongs to a sub-genus of Bombus, Bombus sensu stricto.Bumble bees are important pollinators of wild flowering plants and crops. As generalist foragers, they do not depend on any one flower type. However, some plants do rely on bumble bees to achieve pollination. Loss of bumble bees can have far ranging ecological impacts due to their role as pollinators. In Britain and the Netherlands, where multiple bumble bee and other bee species have gone extinct, there is evidence of decline in the abundances of insect pollinated plants.

Bumble bees are also excellent pollinators of many crops. Bumble bees are able to fly in cooler temperatures and lower light levels than many other bees, and they perform a behavior called “buzz pollination”, in which the bee grabs the pollen producing structure of the flower in her jaws and vibrates her wing musculature causing vibrations that dislodge pollen that would have otherwise remained trapped in the flower’s anthers. Some plants, including tomatoes, peppers, and cranberries, require buzz pollination.

Prior to 1998, the western bumble bee was both common and widespread throughout the western United States and western Canada. The U.S. states included in the former range of this species are: northern California, Oregon, Washington, Alaska, Idaho, Montana, western Nebraska, western North Dakota, western South Dakota, Wyoming, Utah, Colorado, northern Arizona, and New Mexico. Since 1998, this bumble bee has undergone a drastic decline throughout some areas of its former range. While viable populations still exist in Alaska and east of the Cascades in the Canadian and U.S. Rocky Mountains, the once common populations of central California, Oregon, Washington and southern British Columbia have largely disappeared. We are trying to find out how widespread this pattern is; unfortunately, most of this bee’s historic range has never been systematically sampled.

Formerly common throughout much of its range, populations from central California to southern British Columbia and west of the Sierra-Cascade Ranges have declined sharply since the late 1990s. There have been significant range losses in these regions, particularly from lower elevation sites in California, western Oregon and western Washington. Read More.

There are a number of threats facing bumble bees, any of which may be leading to the decline of Bombus occidentalis. The major threats to bumble bees include: spread of pests and diseases by the commercial bumble bee industry, other pests and diseases, habitat destruction or alteration, pesticides, invasive species, natural pest or predator population cycles, and climate change.Commercial bumble bee rearing may be the greatest threat to Bombus occidentalis. In North America, two bumble bee species have been commercially reared for pollination of greenhouse tomatoes and other crops: B. occidentalis and B. impatiens. Between 1992 and 1994, queens of B. occidentalis and B. impatiens were shipped to European rearing facilities, where colonies were produced then shipped back to the U.S. for commercial pollination. Bumble bee expert Robbin Thorp has hypothesized that these bumble bee colonies acquired a disease (probably a virulent strain of the microsporidian Nosema bombi) from a European bee that was in the same rearing facility, the Buff-tailed Bumble Bee (Bombus terrestris). The North American bumble bees would have had no prior resistance to this pathogen. Dr. Thorp hypothesizes that the disease then spread to wild populations of B. occidentalis and B. franklini in the West (from exposure to infected populations of commercially reared B. occidentalis), and B. affinis and B. terricola in the East (from exposure to commercially reared B. impatiens). In the late 1990s, biologists began to notice that B. affinis, B. occidentalis, B. terricola, and B. franklini were severely declining.

Where these bees were once very common, they were nearly impossible to find. B. impatiens has not shown a dramatic decline; Robbin Thorp hypothesizes that B. impatiens may serve as a carrier of an exotic strain of Nosema bombi, although it may not be as severly affected by the disease as B. affinis, B. occidentalis, B. terricola, and B. franklini. B. affinis, B. occidentalis, B. terricola, and B. franklini are closely related to each other (they all belong to the subgenus Bombus sensu stricto). B. impatiens is not as closely related, which may explain the difference in sensitivity to a pathogen. This hypothesis is still in need of validation, although the timing, speed, and severity of the population crashes strongly supports the idea that an introduced disease caused the decline of bees.

The rearing company Koppert recently applied for a permit to transport the eastern species Bombus impatiens to California for crop pollination. The Xerces Society worked with bumble bee researchers to prepare comments to the USDA/APHIS discouraging the movement of these bees into new areas.

Besides the threat posed by the commercial bumble bee industry, there are many other threats to wild bumble bee populations. Bumble bees are threatened by many kinds of habitat alterations which may destroy, alter, fragment, degrade or reduce their food supply (flowers that produce the nectar and pollen they require), nest sites (e.g. abandoned rodent burrows and bird nests), and hibernation sites for over-wintering queens. Major threats that alter landscapes and habitat required by bumble bees include agricultural and urban development. Livestock grazing also may pose a threat to bumble bees, as animals remove flowering food sources, alter the vegetation community, and likely disturb nest sites. As bumble bee habitats become increasingly fragmented, the size of each population diminishes and inbreeding becomes more prevalent. Inbred populations of bumble bees show decreased genetic diversity and increased risk of decline.

Insecticide applications on farms poses a direct threat to foraging bumble bees. Insecticide application on Forest Service managed public lands for spruce budworm has been shown to cause massive kills of bumble bees and reduce pollination of nearby commercial blueberries in New Brunswick. Broad-spectrum herbicides used to control weeds can indirectly harm bumble bees by removing the flowers that would otherwise provide the bees with pollen and nectar.

Bumble bees are threatened by invasive plants and insects. The invasion and dominance of native grasslands by exotic plants may threaten bumble bees by directly competing with the native nectar and pollen plants that they rely upon. In the absence of fire, native conifers encroach upon many meadows, which removes habitat available to bumble bees. The small hive beetle (Aethina tumida) is an invasive parasite of the honeybee, yet it also infests bumble bee colonies. Its actual impact on bumble bee colonies could be severe, although it has not been well studied.

Global climate change also poses a real threat to bumble bees; anecdotal evidence has suggested that some of the bumble bee species adapted to cool temperatures are in decline, whereas warmer adapted species are expanding their ranges. Baseline data and long term monitoring are needed to better understand the true impact of climate change on bumble bees.

Much of the content for this page was developed from a status review, co-authored by Elaine Evans (Xerces), professor emeritus Robbin Thorp (U.C. Davis Department of Entomology), Sarina Jepsen (Xerces), and Scott Hoffman Black (Xerces). Bee illustrations were provided by Elaine Evans.

Funding for our efforts to conserve bumble bees in decline has been generously provided by the CS Fund and Xerces Society members.