Annual census of monarchs overwintering on the California coast reveals the lowest number of butterflies in recent years.

PORTLAND, Ore.; February 2, 2018—An annual census of monarch butterflies overwintering along California’s coast reveals that populations in western North America are at their lowest point in five years, despite recovery efforts. Volunteers with the Xerces Society’s Western Monarch Thanksgiving Count visited more sites this past year than have ever been counted since the survey began in 1997, yet they tallied fewer than 200,000 monarchs.

Population estimates at individual sites also suggest that the western monarch population has continued to shrink. Of the 15 sites which have been monitored annually for more than two decades, 11 had lower counts than last year.

“Counts at some of the state’s largest sites were dramatically lower,” said Emma Pelton, conservation biologist with the Xerces Society. “Pismo Beach State Park was down by 38%, a private site in Big Sur was down by 50%, and the Monarch Butterfly Sanctuary in Pacific Grove was down 57%, from 17,100 to just 7,350 butterflies.”

The few sites in which monarch numbers remained stable or increased compared to 2016, include Natural Bridges State Park, Moran Lake, and Lighthouse Field State Park, all in Santa Cruz County.

Monarch butterflies that spend the winter within forested groves along California’s central coast are born on milkweed throughout western states, traveling to the coast from as far away as Arizona, Utah, Idaho, and Washington. The western population of monarchs has undergone a long term decline that mirrors the trend observed at overwintering sites in the mountains of central Mexico, where monarchs from both the eastern and western U.S. also spend the winter.

In the late 1990s, a small group of monarch enthusiasts in California became concerned that there appeared to be fewer and fewer monarchs each year and started the Western Monarch Thanksgiving Count. The WMTC is the longest running, most comprehensive effort to monitor overwintering monarchs in California. The count occurs during a three-week period centered on Thanksgiving. Biologists, land managers, and citizen scientists visit overwintering sites year after year to monitor the butterflies.

Growing awareness and willingness to volunteer to aid in monarch conservation, coupled with added Western Monarch Thanksgiving Count trainings for new volunteers, led to a successful monarch monitoring season. Nearly 150 volunteers covered a record 262 sites this year. Many participants also took part in the second annual New Year’s Count, the results of which are still being tallied and will be reported in late-February.

Two of the newest regional coordinators organized volunteers to collect data from areas known to historically host small numbers of overwintering monarchs, but which have not been surveyed for the Thanksgiving count in over a decade. Saul Riatiga surveyed sites in Baja, Mexico, extending the count into a region that is generally overlooked, and Rachel Williams of the U.S. Fish and Wildlife Service visited remote sites in the Saline Valley of the northern Mojave Desert. Monarchs were successfully found in both areas.

The Saline Valley has some of the hardest to reach overwintering sites. Williams recruited 34 surveyors intrepid enough to tackle rocky terrain and dense vegetation to learn more about these unique sites and the butterflies that inhabit them. A total of 145 monarchs were counted in 3 of the 5 canyons surveyed.

This fall and winter have been challenging seasons for the residents of California, with unseasonably warm temperatures, wildfires, smoke, and mudslides; we do not yet know the impacts of these events on late season migrating and breeding monarchs.

The Xerces Society received numerous reports of late season breeding, and fewer clusters this fall, suggesting that some monarchs may have arrived at overwintering sites later and stayed active longer. The low estimate of monarchs this year may be attributable, in part, to later than average clustering. Regardless, monarch butterflies are at risk of extinction and action is needed across their range to bring them back. 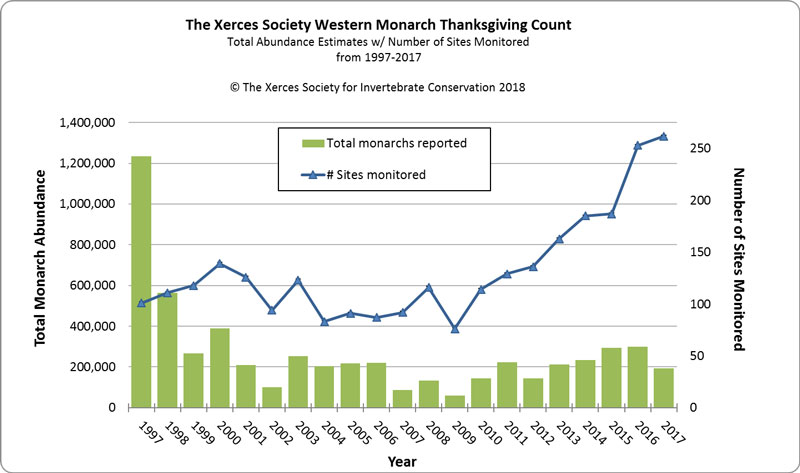 The data from and information about the Western Monarch Thanksgiving Count is at www.westernmonarchcount.org

Read more about Xerces’ Monarch Conservation Campaign, including efforts to conserve overwintering sites in California and restore breeding habitat in key regions of the United States at www.xerces.org/monarchs

To report non-overwintering monarch and milkweed sightings in the West, visit:

Protecting the Life that Sustains Us

The Xerces Society is a nonprofit organization that protects wildlife through the conservation of invertebrates and their habitat. Established in 1971, the Society is a trusted source for science-based information and advice. We collaborate with people and institutions at all levels and our work to protect monarchs, bumble bees, and many other species encompasses all landscapes. Our team draws together experts from the fields of habitat restoration, entomology, botany, and conservation biology with a single focus—protecting the life that sustains us. To learn more about our work, visit www.xerces.org.

A group of health and environmental organizations filed a legal petition today, calling upon the California Department of Pesticide Regulation to regulate the planting of crop seeds coated with neurotoxic neonicotinoid insecticides (neonics) and close a loophole that allows the unchecked use of neonic-treated seeds in California’s farms. The petition follows a scientific report released today finding these seeds may result in the use of over half a million pounds of unregulated pesticides per year in the state.
August, 17 2020

The Xerces Society for Invertebrate Conservation today filed a petition seeking Endangered Species Act protection for the western ridged mussel. The western ridged mussel, which can live for many decades in rivers and streams in Oregon, Washington, Idaho, California, and Nevada, has been extirpated from 43% of its historic range.
August, 05 2020

As the Environmental Protection Agency prepares to determine whether to renew dicamba product registrations for the 2021 growing season, a new report details how the herbicides pose serious threats to wild plants and the wildlife that depend upon them. The report from the National Wildlife Federation, Prairie Rivers Network and the Xerces Society for Invertebrate Conservation, Drifting Toward Disaster: How Dicamba Herbicides are Harming Cultivated and Wild Landscapes, reviews the state of the science on the potential far-reaching impacts of dicamba use.