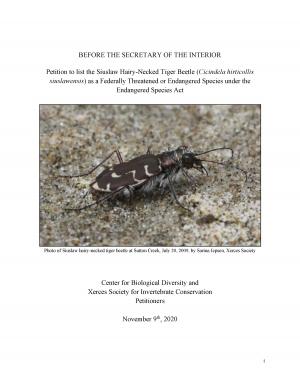 The Siuslaw hairy-necked tiger beetle was once found on coastal beaches from northern California to Washington but has been lost from most places it was historically found. The most recent surveys found the beetle at only 17 sites in Oregon and two sites in Washington. At nearly all sites, fewer than 50 individuals have been found. The tiger beetle is severely threatened by habitat loss, off-road vehicles (ORVs), climate change, coastal erosion, trampling by beach-goers, inbreeding and invasive species.

The Center for Biological Diversity partnered with the Xerces Society for Invertebrate Conservation to file a petition seeking Endangered Species Act protection for this imperiled insect. Endangered Species Act protection will ensure that the federal and state agencies, which manage remaining populations, protect the tiger beetle from further threats.