Collectively, urban and suburban areas have the potential of offering millions of acres of life-giving habitat to pollinators. The goal of Bee City is to help communities recognize and embrace that fact.

This piece originally appeared in the Spring 2019 edition of Xerces’ biannual publication Wings. Click to view the full Spring 2019 issue.

Mark Twain said, “The two most important days in your life are the day you are born and the day you find out why.” I found my “why” in 2011, when I formed a steering committee of beekeepers from Buncombe County, North Carolina to design the program that would become Bee City USA. Our goal was both straightforward and audacious: to engage as many people as possible in reversing the population declines of native bees, honey bees, and other pollinators.

What we lacked in funding, we made up for in passion. Our initial efforts paid off when, on June 26, 2012, the city council of Asheville (the Buncombe County seat) voted unanimously to adopt the resolution to become the first affiliate of Bee City USA. The council chamber erupted in celebration.

Individuals, churches, nonprofits, and companies got busy enhancing pollinator habitat in Asheville. It seemed that everybody wanted to get on the bee bandwagon! As word spread about the new program, we received inquiring emails and phone calls from communities around the nation. We continued working to make Asheville the model of what it meant to be “PC”—pollinator conscious—and building the organizational infrastructure. We trademarked the name Bee City USA, created a web site, and made presentations. Meanwhile we held our breath, waiting for that second application.

In September 2014, just when we were losing hope that the program would ever grow beyond Asheville, Dolly Warden, a beekeeper from all the way across the country in the small community of Talent, Oregon, persuaded her city to adopt the resolution and apply to become a Bee City affiliate. A third city soon followed, and a fourth, and then a fifth, and the network grew. Today eighty affiliates in twenty-four states and the District of Columbia have been certified, from Seattle, Washington, to Webster, Florida, and from Durham, New Hampshire, to Thousand Oaks, California.

Collectively, urban and suburban areas have the potential of offering millions of acres of life-giving habitat to pollinators. The goal of Bee City is to help communities recognize that fact, and to engage them in the effort to expand urban and suburban pollinator habitat that is rich in a diversity of locally native plants and is as free of pesticides as possible.

In order to be certified as a Bee City affiliate, a city must commit to establishing a standing committee to facilitate community-wide pollinator conservation; to creating and disseminating a list of native plant species and an integrated pest management plan; and to raising community awareness through events and habitat enhancement activities. To maintain their certification, cities are required to report on their efforts each year, and these reports are posted on our website to celebrate the programs’ accomplishments and to inspire the network of certified and prospective Bee City USA affiliates. The most important message is this: any community can contribute to pollinator conservation, and it can do so through a wide variety of possible actions.

Bee City USA has energized a host of pollinator advocates across the country. Seattle has been a Bee City USA affiliate since 2015. Its Bee City committee has taken steps to create and manage habitat—including collaborating with Seattle City Light to establish habitat along a powerline corridor—and to eliminate pesticides from city parks. In 2016, Decatur, Georgia, became that state’s first Bee City, quickly launching an active educational program that includes elementary school visits, native plant talks, pollinator photography walks, and swarming the city’s Mardi Gras celebration. Decatur is working to eliminate residential pesticide treatments for mosquitoes, and has even adopted a new name, Beecatur. Similar tales could be told of enthusiastic community members from the scores of other affiliates—leading walks, giving talks, planning new habitat, enacting pesticide bans, and adopting integrated pest management programs for their municipal lands.

It is imperative that we change our idea of a desirable landscape away from one of large green lawns treated with chemicals and bordered by predominantly exotic plants to one of a diversity of native plants free of pesticides. This effort takes place one person, one neighborhood, and one community at a time, and the most successful affiliates recognize that becoming a Bee City is not a short-term commitment. They recognize that, if we are successful, then someday in the future the dominant landscaping practices of today will no longer be so widespread. Every interaction during the process is an educational opportunity, influencing how each of us defines an “attractive” landscape.

Remember Talent, Oregon? It wasn’t long before Talent inspired the neighboring communities of Ashland, Phoenix, and Gold Hill to apply. The regional zest for pollinator conservation led Mike Oxendine, landscape director at Southern Oregon University in Ashland, to ask Bee City about starting a program for higher education. With his staff’s help in designing the campus affiliates’ commitments, Bee Campus USA was launched in 2015.

From the outset, we insisted that the new program had to be anchored in the grounds department, where major landscaping and pest management decisions are made. Reasoning that institutions of higher education were well-positioned to influence a great many people and to demonstrate the successful installation of pollinator habitat in landscapes, we also insisted that campuses integrate pollinator conservation into their curricular and service-learning programs.

Later that same year, an enthusiastic team from Southern Oregon University presented the Bee Campus USA program at the annual meeting of the Association for the Advancement of Sustainability in Higher Education, winning the prize for best case study. Such presentations stimulated many new applications, and today there are seventy-three certified affiliate campuses in thirty-two states (the list is constantly growing; view updated numbers here).

In 2016, we had a request to extend Bee City USA to Canada. By that time, we had expanded “city” to include counties, but stretching “USA” to another country was too much, particularly for a volunteer-run organization. Instead, we helped Shelly Candel start Bee City Canada, which today has twenty-three certified communities.

Since its founding in 2011, Bee City USA has never needed to seek out cities or campuses to become affiliates; rather, people learn about the program through word of mouth and are galvanized to spur their local government to participate. To some degree this is how the organization was able to operate on a volunteer basis. By 2017, however, it was becoming increasingly obvious that to provide the constantly growing network of affiliates with the ongoing support and technical assistance that they needed (and deserved) in order to be effective, Bee City had to have greater capacity. Happily, the Xerces Society liked what we were doing and welcomed our request to join forces. In June 2018, Bee City USA became an official initiative of the Xerces Society, and I joined the staff as the Bee City coordinator.

Bringing the knowledge and skills of Xerces’ more than fifty talented staff members to bear on Bee City’s outreach has already been transformative. From the beginning we had looked to Xerces for guidance through its publications, workshops, and technical support. Xerces staff members now directly provide information and advice on how to avoid pesticides, install habitat, and choose appropriate plants, as well as on many other important aspects of pollinator protection. Part of our job at Xerces is to facilitate communication among affiliates to pass on the best approaches to educating the public locally and to creating more pollinator habitat on public and private land. We do that through our website, a listserv for affiliate committee members, a monthly e-newsletter, and social media. With increased capacity we are offering educational webinars for affiliates. 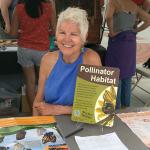 Phyllis Stiles, an employee of the Xerces Society from 2018-2019, was named the North American Pollinator Protection Campaign’s United States’ Pollinator Advocate of the Year for 2015. She founded Bee City USA in 2012, and Bee Campus USA in 2015. When she attended bee school in 2008, "they had her at hello." Her days are now filled with learning all she can about pollinators, native plants, pesticides and what people can do to sustain the 200,000+ species of hardworking pollinators that sustain our planet.

Intrinsically Linked: Why Climate-Smart Agriculture Must Not Neglect Biodiversity