With millions of invertebrates on Earth – more than 97 percent of the world’s animal species – we’re never far from inspiration for spooky season at the Xerces Society.

This Halloween, we’re sharing staff favorites for wonderful, weird and even legendary invertebrates. Whether they skitter, dig, slurp or click, each of these incredible creatures plays an important role in our ecosystems. Perhaps they’ll even play a role in your last-minute costume ideas. (We can’t say we’ve never tried it.)

Experts at detecting the odor of death, these beetles use their antennae to help them locate small animals within an hour of death from up to two miles away. A breeding pair will get to work right away to prepare the carcass – burying it, cleaning off any feathers or fur, and working the carcass into the shape of a ball before the female lays her eggs in a depression on top.

Burying beetles provide their larvae with parental care, which is uncommon in insects. The adults provide predigested carrion to the larvae on request until they have grown enough to feed themselves. By being active at night and underground, young burying beetles grow up in a relatively safe environment, and their work breaks down the carrion and adds nutrients to the soil.

Once found in 35 states in the eastern and central United States, American burying beetles are now found only in undisturbed habitats in a few states. The species was listed as federally endangered in 1989.

Prominent in ancient Egyptian mythology, dung beetles were associated with rebirth after death and were considered sacred. Ancient Greeks and Romans adopted the scarab as a good luck symbol, and images of a beetle and its dung ball even appeared on ancient coins. In most cultures today, dung beetles are valued for their efficient cleanup activities.

Dung beetles are adept at locating dung, a resource for which there is a great deal of competition. Dung beetles will slice off a chunk of dung, maneuver it into a ball, and bury it, sometimes relocating it before burial. An egg is laid on each ball of dung, and larvae consume the dung after emerging, digesting the cellulose in the dung’s plant material with the help of gut microbes.

Dung beetles mix nutrients from dung with the soil, help reduce soil compaction, and help facilitate the further breakdown of the dung by microorganisms. They are particularly important in rangelands, accelerating the incorporation of dung and nutrients into soil and increasing plant productivity for grazing. On farmlands, dung beetles reduce food-borne pathogens such as E. coli up to 90 percent, supporting food safety.

Tick, tock! This wood boring beetle makes its home in decaying wood, including in structural timbers of century-old houses. It got its spooky name from its mating behavior: male deathwatch beetles tap their heads against the wood of their tunnels in search of female beetles, who reply with a head tap of their own. The rhythmic tap-tap, tap-tap of male deathwatch beetles navigating to females deep inside old wooden beams could be heard in the quiet of the night, or during a vigil over a sickbed. The clocklike sound was considered a bad omen, or a sign that death may arrive soon. It has been an inspiration for prose – Tom Sawyer shudders at the “ghastly ticking of a deathwatch in the wall” – and poetry.

The species has a wide range across Europe and North America. Its preferred hardwood for larval development is oaks. Larvae of the deathwatch beetle are slow-growing and will bore through old wood for several years, up to a decade or more, before pupating and living for a brief few weeks as an adult.

The damage from this slow larval excavation of structural wooden beams can be extensive; deathwatch larvae almost caused the collapse of the roof of Westminster Abbey in the mid-20th century! However, broad application of insecticides to infested timbers has been found to be mostly ineffective at controlling these deep-seated larvae. A more well-rounded approach starts with reducing the moisture content of the wood (better ventilation, lower humidity, higher temperatures), followed by using more targeted approaches to locate and trap adult beetles.

Just thinking about being a small insect prey item of this ferocious predator hurts. You could expect to be forcibly injected with digestive enzymes that will dissolve your internal organs. As you lay dying, you could then expect the assassin bug to finish sucking the life right out of you. To add insult to the injury, you might even have your dead carcass slung over the assassin bug’s back to use as camouflage as it hunts another victim.

Assassin bugs belong to the family Reduviidae, with more than 160 species in North American and approximately 7,000 described worldwide. While they are fearsome to aphids and other prey, they can be a good omen for gardeners, clearing away pests.

The wingspan of this beautiful, darkly patterned moth can reach almost 9.5 inches in females, making it one of the largest moths in North America. It ranges from Brazil into the southern United States and migrates as far north as southern Canada in some years. Much like the monarch butterfly, black witch moths have the ability to migrate great distances, including over open water.

Feeding on many plants in the pea family (Fabaceae), this moth flies between June and October and is sometimes found resting in the mornings underneath peoples’ porch eaves, lending itself to human folklore. Throughout its range, it is variously known as a bad omen, the embodiment of a lost soul, or recently deceased loved one.

But the varied meanings aren’t all quite so serious: in some parts of Mexico, one flying over your head means you’ll just go bald! In yet other places the moth has a positive association. In the Bahamas, they are referred to as money moths, and having one land on you or your door means you’ll be coming into good fortune soon.

Your favorite horror movie may have taken its cues from the everyday life of invertebrates. For the Alien franchise, where aliens lay their eggs in a human host, look no further than your garden for its inspiration: parasitoid wasps.

Many species of parasitic wasps and flies lay their eggs on a host insect, whereupon the egg hatches into a larva that grows inside the host’s body until it is large enough to break free, killing its host in the process. Gruesome.

As our heroine says in Alien Vs Predator, “The enemy of my enemy is my friend,” and that’s true for parasitoid wasps. They do not sting people and can be one of the most effective forms of chemical-free pest control gardeners have. In fact, Xerces’ Bee Better Certified program designs farmland pollinator strips specifically to attract parasitoids and other pest predators that support crop health. 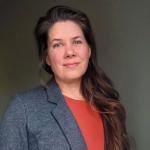 Deborah Seiler joined the Xerces Society in 2021 as Director of Communications, bringing over ten years of experience representing environmental and research institutions. She has previously led invasive species campaigns in Wisconsin, coastal science communications with California Sea Grant, and served as CCO of Illinois Extension. Deborah attended University of California-Davis and University of Wisconsin-Madison, where she studied science communications, environmental behavior, and digital media.