Standing Up for Native Thistles

To be honest, I didn’t pay native thistles much mind prior to the winter of 2018. I knew they existed, I knew they held an undeserved bad reputation, I knew several species occurred in Iowa, but they never caught my attention as much as say, compass plant (Silphium laciniatum) or Culver’s root (Veronicastrum virginicum), some of my favorite native prairie species. When I did encounter a native thistle, it was a bit intimidating. Which one am I looking at, tall or field or…? What are the different characteristics? They look so similar! I soon realized I wasn’t the only one who felt this way.

In December 2018, a partner of the Xerces Society made us aware the Iowa Department of Agriculture and Land Stewardship was providing a short window for public comment about the state code that shapes the management of noxious weeds within the state. Xerces staff jumped at the opportunity to share our voice. As an organization, we have been advocating for native thistles for some time. If we had the chance to help change Iowa state policy, we were going to take it.

With Xerces coworkers Sarah Foltz Jordan and Eric Lee-Mäder, I wrote a letter to the state department requesting that native thistles be removed from the list of Class B noxious weeds for control and that the only thistles included were nonnative species in the genus Cirsium and Carduus. We submitted our letter within 24 hours of notification and waited. Months went by and we heard nothing. I emailed the contact to whom we had submitted our letter, nothing. Finally, in June 2019 we heard a rumor that state code had been changed to benefit native thistles. I was stunned and ecstatic. I did my own research just to be sure our wish had come true and sure enough, it had! State code had been rewritten to remove native thistles as weeds needing to be controlled. Since then, I have learned more about these beautiful plants and grown to appreciate them just as much as other native wildflowers.

There are six species of native thistles in Iowa, and three of these species are uncommon to rare throughout the state and are listed as a species of special concern. Native thistles have been a largely misunderstood and wrongly maligned group of wildflowers because they are often mistaken for their relatives, introduced nonnative species of thistles which have become highly problematic noxious weeds. Unlike these introduced species, native thistles are not aggressive invaders and do not degrade ecosystems.

Native thistles play an important role in our ecosystems. In the Midwest, thistles occur in a broad range of habitats—pasture grasslands, native prairie remnants, roadsides, idle fields, open woodlands, savannas, and wetlands. The seeds of our native thistles help sustain enormous flocks of songbirds, including the American goldfinch (Spinus tristis), Iowa’s state bird. Goldfinches breed later than most birds, waiting to nest when thistle fruits are mature. The birds line their nests with the fluffy material of the fruits and feed the seeds to their young. The nectar and pollen of these plants draw countless flower visitors, including the federally endangered rusty patched bumble bee (Bombus affinis). Native thistles also fill an important bloom gap in late-summer and fall, when other native species may not be in flower, helping to fuel the monarch migration.

Additionally, native thistles have an underappreciated uniqueness. The foliage can be light- to medium-green in color, depending on how much pubescence (hairiness) is present. They also exhibit an interesting stem and leaf architecture and have deep purple to pink blossoms. Our native thistles are every bit as impressive as numerous other native plants.

The life cycle of the American goldfinch (Spinus tristis), Iowa’s state bird, is intertwined with native thistles. These birds delay nesting until thistle fruits are mature and use the fluff to line their nests and the seeds to feed their young. (Photo: Jim Eckberg.)

There is still more work to be done in regards to native thistles in Iowa. Although there is no requirement to control them, native thistles are still technically noxious weeds alongside their nonnative relatives, which puts them at continuous risk. Ongoing education about how to identify native thistles and their benefits to ecosystems is necessary to help change the general mindset that all thistles are problematic. This year the Xerces Society partnered with the Iowa Department of Natural Resources to create an informational identification brochure for landowners, practitioners and the general public to promote native thistles. The Guide to Iowa's Native Thistles describes Iowa’s native and nonnative thistles and provides guidance on recognizing the different species and their distinct features.

The genus Cirsium has many different native thistle species naturally occurring all throughout the United States. Many of the species listed within the new Iowa brochure guide are also native to areas of the Midwest, Great Plains, and the Northeast. If you’d like to learn more about native thistles check out Xerces’s Native Thistles: A Conservation Practitioner's Guide for more in-depth information.

My hope is that through education, advocacy, and policy change we can continue making improvements to save our native species and enhance biodiversity within Iowa. Perhaps, other states can take similar steps to stand up for their native thistles.

Native thistles have an underappreciated uniqueness, with a distinctive stem and leaf architecture. The foliage can be light- to medium-green in color, depending on how much pubescence (hairiness) is present. (Wavyleaf thistle, Cirsium undulatum, photographed by Justin Meissen, Flickr [CC BY-SA 2.0].)

Native species have a very long history of naturally occurring in the natural ecosystems of a region (e.g., pre-European settlement) and are well adapted to their regional climate and soils. Relationships between native species (for example, between plants and animals) are tight knit; in some cases, species depend on one another for survival. The thistle long-horned bee (Melissodes desponsa) collects only the pollen of thistles to feed her young, who cannot survive on the pollen of other plants.

Nonnative species, also known as exotic or introduced species, are those that naturally occur in other parts of the world but have been introduced to a new area outside of their native range. Sometimes nonnative plants are able to thrive and out compete native plants due to the lack of “control species,” those that have evolved with them and regulate their population growth by herbivory, competition, or disease. Nonnative species can become invasive, replacing native species and causing serious ecological and economic damage. A few nonnative thistles are listed as a noxious species due to the degradation they can cause to agronomic systems.

Canada thistle (Cirsium arvense) is one of the most invasive and damaging nonnative thistles for farmers, landowners, and land managers alike. Canada thistle is difficult to control because of its reproductive strategies—a perennial plant which reproduces by both seed and vegetative growth. Plants produce deep creeping roots with buds that give rise to new shoots. These multiple reproduction strategies enable Canada thistle to quickly dominate an area and outcompete native species. The key to control of nonnative thistles is interrupting seed production by not allowing flowers to go to seed. Multiple management tools may be necessary (mowing and spot spraying) for control and must be timed appropriately to be most effective. In some cases, control efforts may take multiple seasons to see a reduction or elimination of nonnative thistle.

Learn more about native thistles and how to propagate them in this in-depth conservation guide, Native Thistles: A Conservation Practitioner's Guide. 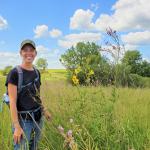 Sarah Nizzi is originally from central Iowa. Sarah is a graduate from Drake University with a bachelor's of science in environmental science. Her experience includes natural resource management in the private and public sector, native seed propagation, and private land management throughout the state of Iowa. Currently, Sarah covers the whole state of Iowa, providing technical and financial assistance to farmers and landowners interested in pollinator conservation, as well as training NRCS and partner staff on pollinators and pollinator habitat.