Bees and other pollinators touch our lives every day in ways we may not realize. They are responsible for as much as one third of the food and drinks that we consume, and contribute to the production of our clothes. They help define our seasons: The flowering meadows of spring, the berries of summer, the pumpkins we carve for Halloween and eat at Thanksgiving, and the southward migration of monarchs that signifies the approach of Dia de Los Muertos.

A World Without Bees

Imagine a world without most of the foods you love. Without bees we wouldn’t have the abundance of apples, pumpkins, strawberries, blueberries, or almonds that we enjoy. Of the foods and beverages that we consume daily, over 30% rely on or benefit from a pollinator. Pollinators even help milk production: the alfalfa and clover cows graze is replenished by seed pollinated by bees. Worldwide, production of animal-pollinated crops is valued at over $235 billion annually. The loss of pollinators would negatively affect both farmers and consumers who would be faced with reduced crop yields and lower quality products. Moreover, insect-pollinated foods contain many key nutrients, such as vitamin E, essential to our diet. A world without pollinators would not only leave us with fewer food choices, but would make it substantially harder to find the nutrition we need to survive. 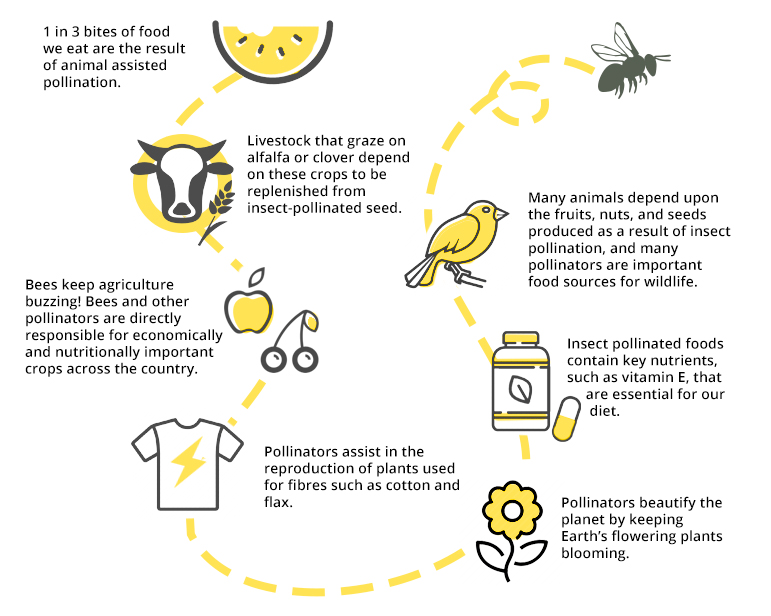 Pollinator populations are in decline in many parts of the world and these declines put agricultural productivity and the health of natural ecosystems at risk. Over the past decade, we have seen a dramatic rise in annual hive losses for the domestic honey bees in the U.S., with beekeepers now losing more than 30% of their bees each year.

Native pollinators may be faring even worse. Numerous wild, unmanaged pollinator species native to North America are experiencing declines and a significant proportion of native bee species are at risk of extinction. For example, at least 28% of North America’s bumble bees have undergone significant declines, including species that were formerly common and widespread. In 2017, the rusty patched bumble bee, which has disappeared from 87% of its historic range, became the first bumble bee to be listed as an endangered species.

Butterflies in the U.S. have also undergone significant declines: 19% are at risk of extinction, including species with special habitat needs as well as generalist species that were once widespread. The iconic monarch butterfly, for example, has experienced declines of 74–80% in populations both east and west of the Rocky Mountains. Habitat loss, alteration, and fragmentation, as well as diseases, pesticide use and climate change are all threats to pollinators and the ecosystems that they support.

What’s more, many common pollinating species are likely suffering similar fates as those referenced above. A 2016 study documented a more than 75 percent decline in flying insect biomass over a 27 year period. The study was conducted in natural areas in Germany, locations that should be relatively well protected from impacts known to reduce insect biomass.

All Hands on Deck

In order to reverse these worrying trends, we must all act to protect pollinators. From giving pollinators the habitat and resources they need to thrive, changing our landscaping and agriculture practices to reduce negative impacts, and educating others about what’s at stake—we can make a difference while there is still time.

Who Are the Pollinators? What Can I Do? Bee Better Certified: One Acre at a Time