To Save Monarchs, We Need More than Just Milkweed

The message is out: Monarchs are in decline across North America. The loss of milkweed plants due to extensive herbicide use and changes in farming practices, such as the widespread adoption of herbicide-resistant crops, has been identified as a major contributing factor of monarch’s decline in the eastern U.S. Disease, climate change, widespread insecticide use, and loss or degradation of nectar-rich habitat may also be contributing to declines. A memorandum issued by President Obama and subsequent U.S. national strategy to protect monarchs and other pollinators, in addition to a recent petition to list monarchs under the Endangered Species Act, has highlighted their plight and led to a surge of interest in protecting these amazing animals and their phenomenal fall migration.

The national call to action has focused primarily on planting milkweeds, which are the required host plants for monarch caterpillars, a simple and effective way to support monarch conservation. However, it is important to remember that milkweed may not be appropriate in every landscape. For example, we do not recommend planting milkweed in areas such as coastal California, where it did not historically occur.

While restoring the millions of milkweed plants that have been lost is certainly an important strategy, monarchs need more than milkweed to support them throughout the year. Adult monarchs need nectar to fuel them during spring migration and breeding and to build up stores of fat which sustain them during fall migration and winter. Too few nectar plants in the landscape may reduce the number of monarchs that successfully arrive at overwintering sites in the fall.

There are many sources of information about which species of native milkweeds are best for your region (including from the Xerces Society), but information on which nectar plants are best for monarchs has not been available for large areas of the U.S. To address this need, the Xerces Society has created a series of nectar plant lists based on a database of monarch nectaring observations compiled from a wide variety of sources, including published and technical reports, research datasets, and personal communications with monarch researchers, lepidopterists, botanists, and other experts. This database now houses nearly 24,000 reported monarch nectaring observations on 358 native plant species.

Working with the Monarch Joint Venture and the National Wildlife Federation, the Xerces Society used this database to develop monarch nectar plant guides for all regions of the continental U.S.  Each of the 15 guideshighlights species that are commercially available, are native to and widely found in the region, and are known to be hardy or relatively easy to grow in a garden setting—although, as with any plant choice, we encourage you to use additional references when making final species determinations for your location.

Whenever possible, we included species that were reported by multiple sources or were noted to be exceptional monarch magnets. Each list is also tailored to include only species that bloom during the times of year that monarchs are expected to be in each region. Only native species were included. (These plant lists were compiled using the best available data, but we expect to update them as new information is available. You can help us improve them by submitting your own monarch nectaring observations via our online survey.)

These guides are geared toward gardeners and landscape designers but will also be useful for land managers who are undertaking large-scale monarch restoration projects. And importantly, the plants on these lists will attract not only monarchs but also many other pollinators, from butterflies and moths to bees and hummingbirds.

Nectar Plant Top 10: The ten flowers in this table are those with the greatest number of recorded observations of nectaring monarchs—but be sure to check the nectar plant list for your region to find out which plants are the best for where you live! 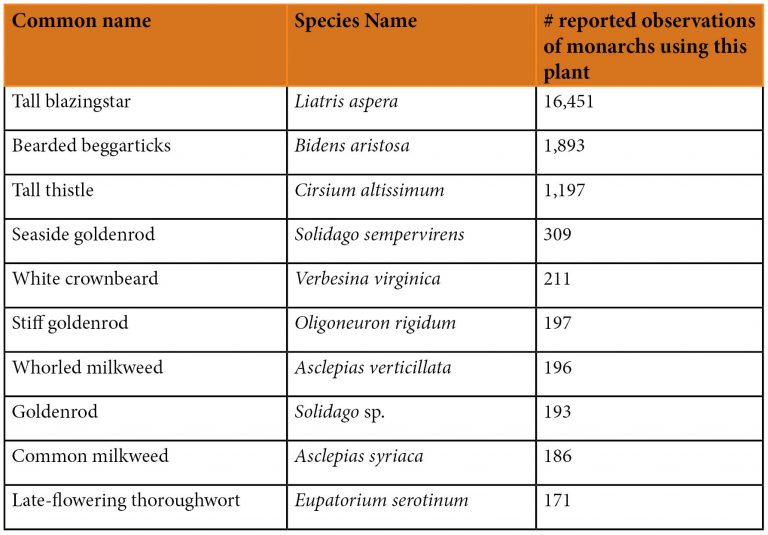