In Search of the Elusive Johnson’s Hairstreak

This article originally appeared in the fall 2020 edition of Xerces’ magazine, Wings. Click to view the full fall 2020 issue.

Picture this scene: It is early summer in the maritime regions of the Pacific Northwest, and you are hiking through a remnant stand of old-growth forest. Giant Douglas-firs and hemlocks tower above you. Dappled sunlight tumbles through occasional breaks in the canopy, and here and there along the trail are little patches of wildflowers in muddied soil. Everything is draped in moss and duff, the branches above laden with mistletoe. You walk through this hushed habitat, a kingdom of owls and bears, and suddenly a slight movement on the yellow flowers of an Oregon grape catches your eye. You move closer. And there, in this forest of oversized life and deep shadows, you see a small brown butterfly. You take one more step and it startles, shooting straight up into the canopy. The butterfly is gone.

Old-growth forests are not exactly the habitat that comes to mind when you think of butterflies. Meadows? Yes. Forest edges? Sure. But deep in old-growth forests? Somewhat surprisingly, there are a few butterfly species that, in the Pacific Northwest, call these habitats home, including the thicket hairstreak (Callophrys spinetorum) and Johnson’s hairstreak (C. johnsoni). Both live in the treetops, their larvae munching away at sprigs of mistletoe. But, while the thicket hairstreak is widespread throughout the West, Johnson’s hairstreak is far rarer and is restricted to a smaller range. It is found in forests from southwestern British Columbia—where the original specimens from which the species was described were collected—south to the Sierra Nevada mountains of northern California. The majority of site records for this species are found west of the Cascade Range in Oregon and Washington, although disjunct populations occur in several other ecoregions, including the Blue Mountains in northeastern Oregon and western Idaho.

Johnson’s hairstreak is often associated with old growth and has been described as an old-growth obligate, but this may be true in only part of its range. In fact, the species can be found in a variety of habitats, from moist forests of western hemlock to dry woodlands of ponderosa pine. And it can occur in a wide variety of elevations, from near sea level in Washington’s Puget Lowlands to as far up as 6,700 feet (1,525 meters) at the summit of California’s Yuba Pass. Mistletoe, a parasitic flowering plant that attaches to the stems and branches of other plants and is typically associated with older forests, is a key component of Johnson’s distribution and is its required larval host plant.

Many different species of mistletoe are found throughout the world, but Johnson’s hairstreak relies on just one, the western dwarf mistletoe (Arceuthobium campylopodum). Taxonomically, dwarf mistletoe used to comprise more species, but recent changes combined several of these—including hemlock dwarf mistletoe (A. tsugense) and fir dwarf mistletoe (A. abietinum)—into the single species. It may grow on western hemlock (Tsuga heterophylla), ponderosa pine (Pinus ponderosa), Brewer’s spruce (Picea breweriana), and true firs (Abies spp.). If you have ever walked through an old-growth hemlock forest in the western Cascades, you have probably seen evidence of mistletoe’s parasitic existence in the form of swelling branches and witches’ brooms, deformed branches that form dense clusters in the canopy.

Dwarf mistletoes are native components in many forests, where they provide important food sources and nesting sites for a wide variety of invertebrates, birds, and small mammals. The plants spread by launching their seeds with an explosive mechanism that flings them out at speeds up to sixty miles per hour and can propel them as far as fifty feet. Covered in a highly sticky substance, the mistletoe seeds adhere when they collide with trees, whereupon they germinate and send small root-like structures into their new host, seeking water and nutrients. It can take several years before visible shoots emerge, and a few more years after that to produce flowers. It is those visible shoots that Johnson’s hairstreak caterpillars depend on for survival. Dwarf mistletoes tend to be mostly leafless, composed instead of knobby, succulent growths that provide the perfect camouflage for the yellowish-green caterpillars. The caterpillars will go through several instars, or molts, as they grow, eventually pupating to wait out the winter. Adults emerge in late spring or early summer and can be found for several months, and, depending on elevation, even into early fall. While they appear to spend much of their time in the canopy, they will descend to the understory to sip nectar from such flowering plants as dogwood (Cornus), Oregon grape (Berberis), ceanothus (Ceanothus), and dewberry (Rubus ursinus); or to puddle, when males gather essential nutrients from a variety of sources such as saturated soil, animal scat, or as the term suggests, muddy puddles.

It is likely that Johnson’s hairstreak occurs in higher numbers and at more sites than is currently known. Accurate assessments of its population distribution and densities are difficult, since its larvae live in the forest canopy and the adults are rarely seen. Although butterfly surveys typically occur in some kind of open meadow or edge habitat where the surveyor moves along a transect, identifying species on the wing or with the help of binoculars or a net, these butterflies require something a little different. Because they are so secretive, spending most of their time in the tree canopy and only occasionally descending to the forest floor, they do not show up very often in transect surveys.

Johnson’s hairstreak may well occur in greater numbers and more places than currently recorded. Surveying for an inconspicuous mistletoe and small brown butterflies in the canopy of a Pacific Northwest old-growth forest has its challenges! (Photo: Matthew Shepherd.)

The U.S. Forest Service has developed and tested several survey protocols specifically for Johnson’s hairstreak, comparing approaches for surveying adults with those for larvae. Researchers have found that adult surveys have a low rate of detection, while larval ground surveys lead to a much higher probability. These entail accessing mistletoe from the ground, whether in blow-down or low-hanging branches, and clipping small clumps to bring back to the lab or office to monitor them for larval activity. If larvae are present, they can be reared to adulthood, which allows for positive species identification, or they can be sent in for genetic analysis to distinguish between the caterpillars of Johnson’s hairstreak and the nearly identical ones of the thicket hairstreak.

You can probably imagine that there are difficulties with this survey method as well. Physical signs of dwarf mistletoe parasitization (including swelling branches and witches’ brooms) can be relatively easy to observe from the ground, but detection of live dwarf mistletoe is more difficult. Ground surveyors can use binoculars to aid in seeing live clumps in tree crowns, but this does not solve the problem of how to access those clumps. Larval surveys may prove to be the most effective approach in western regions of Oregon and Washington where host plants can be found lower to the ground.

Finding live mistletoe clumps can be challenging in ponderosa forests east of the Cascade Range, where mistletoe is typically found much higher in the canopy. The challenge is even greater in places like Oregon’s Blue Mountains, where the ponderosa pines often have few low branches, and reaching the clumps can feel impossible. And how accurate is a method that is biased toward trees with low-growing mistletoe? Are the butterflies using microhabitats higher in the canopy? Should surveyors be climbing trees? That would add a whole new element to this task.

These difficulties, coupled with the lack of any kind of historical baseline of species distribution and abundance, make it tough to determine the population status of the butterfly. Has it declined in recent decades? Prior to 1900, Johnson’s hairstreak is thought to have occurred throughout much of the old-growth coniferous forests in the Pacific Northwest. But over the ensuing decades logging and other timber-management activities have severely reduced or degraded the available habitat. Less than 10 percent of old-growth forests remain in Oregon and Washington. 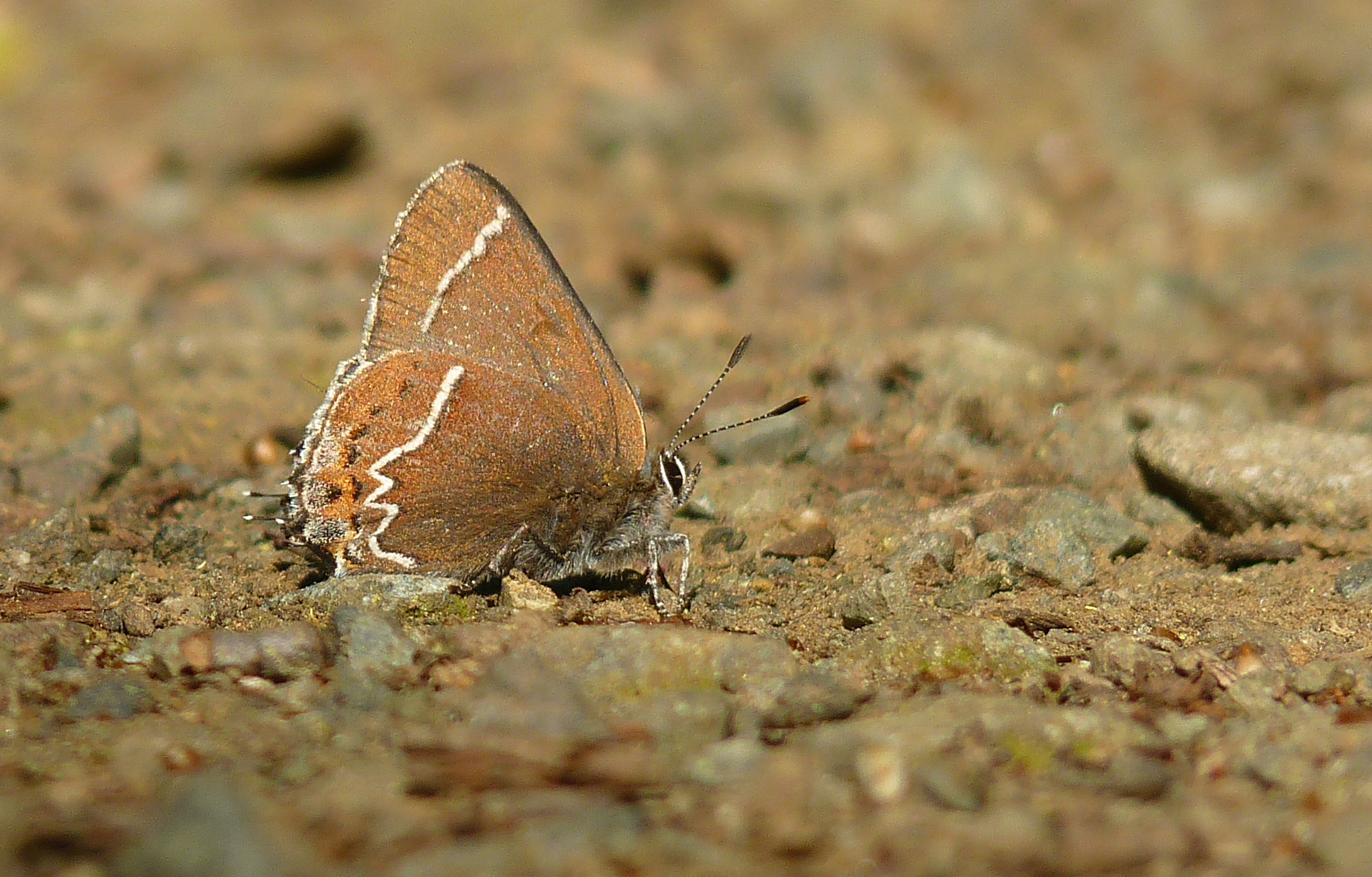 A second butterfly that relies on dwarf mistletoe as a caterpillar host plant is the thicket hairstreak. Found from the Rockies westward, it lives in a wider range of forest and woodland types than Johnson’s hairstreak. (Photo: Mathesont, Flickr [CC BY-NC 2.0].)

Additionally, parasites and disease, the use of pesticides such as Btk, mistletoe suppression (the plant is considered a blight in forestry), and potentially even hybridization with the thicket hairstreak in some parts of its range are thought to be negatively impacting Johnson’s populations. Stochastic events, particularly wildfires, may also negatively affect this species, which is already suffering from fragmented habitat and disjunct populations, and climate change is likely to have long-term consequences. This year wildfires have impacted one million acres in Oregon, and more than seven hundred thousand acres in Washington. Conservation of a species like Johnson’s hairstreak can feel daunting, but management actions that take into account the needs of the butterfly in this region—such as old-growth forests with intact mistletoe—may serve to maintain habitat conditions needed in the core of its range and thus help to alleviate threats to extant populations.

The list of challenges and research questions surrounding this butterfly are long. Is Johnson’s hairstreak truly a rare species, or is it just rarely encountered? How do we best survey for it? Which factors are most limiting to this species’ populations? What are its microhabitat needs? How will climate change and associated increases in wildfire frequency and severity affect this butterfly and its host plant? And, ultimately, how do we as conservation biologists accurately assess the needs and conservation status of an elusive species that is dependent upon a parasitic plant that lives high in the tree canopy?

Read the entire fall 2020 issue of Wings. The theme is forests and woodlands. (Download as PDF.)

Learn more about what you can do to help butterflies and other pollinators in any landscape.

trees and forests
Wings Magazine
butterflies
from the field
research