Spring is here, which for much of the country means that things are starting to wake up. This time of year, I start counting down to when all my favorite invertebrates will emerge from the quiet months of winter. I look forward to seeing all the firsts: a spring hatch of stoneflies, a butterfly gliding on the breeze, a snail creeping out from its mossy hideaway. And even though I live in Oregon, I also welcome firefly season.

For many of you, late spring and early summer are synonymous with fireflies. Shaking off the dormancy of winter, the larvae of flashing fireflies—aka lightningbugs—typically mature into adults in May or June. Females perch on vegetation or sit on the ground while males take flight, flashing their abdomens and awaiting a response from below. Flash–wait–flash. Repeat. This call and answer routine is how many firefly species find mates. For the humans among us, it could just as well be a magic show, a glimmering peek at one of the great wonders of the natural world. 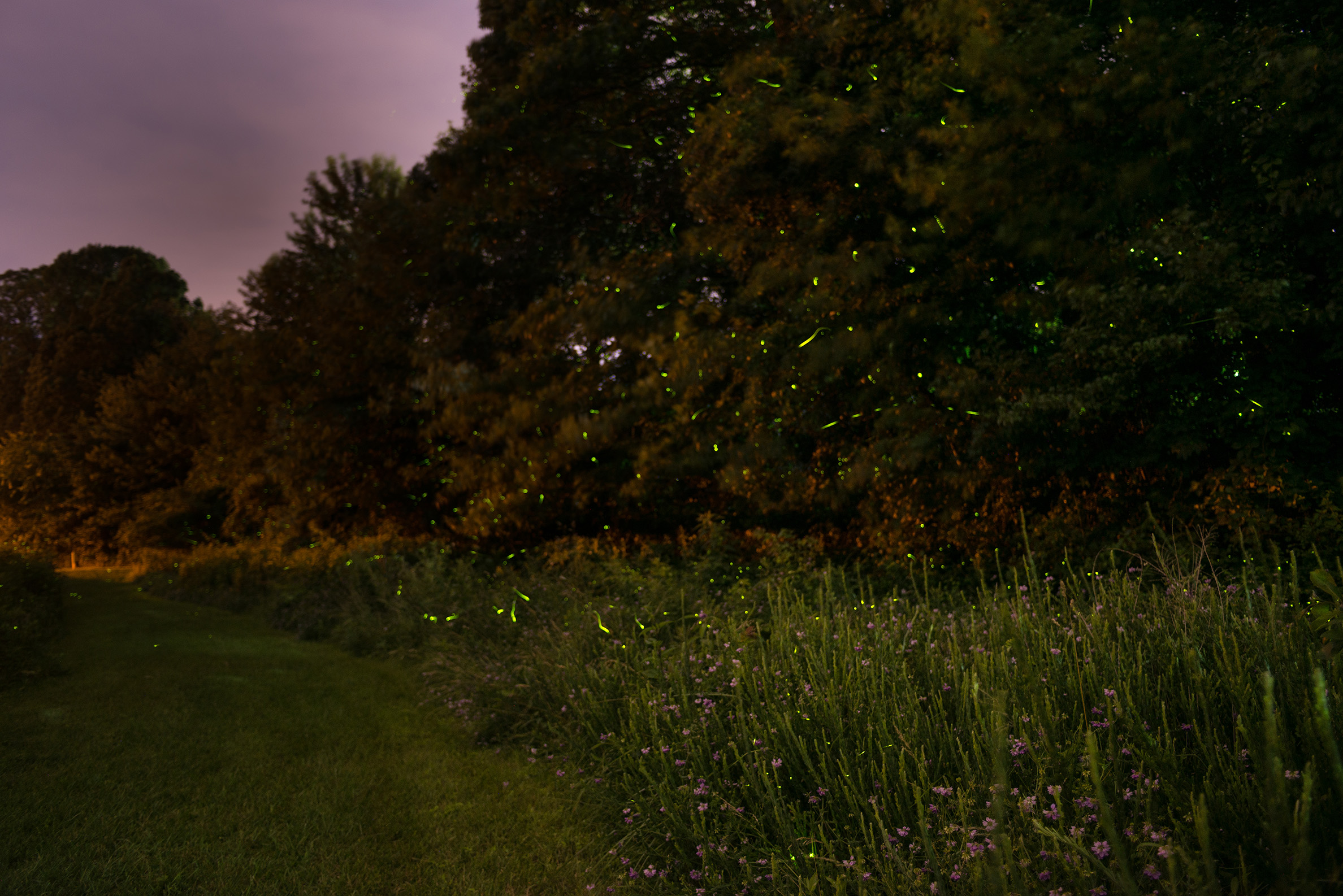 Flashing fireflies are a familiar and beloved harbinger of summer. (Photo: Steve Laythrop [CC BY 2.0].)

Similar to flashing fireflies, glow-worms also utilize bioluminescence to communicate with mates, but the effect is not quite so dazzling to human eyes. Although there are some exceptions to this, like the ethereal blue ghost firefly, glow-worm males tend to be non-luminescent, with enormous eyes that they use to spot inconspicuously glowing, flightless females. I like to think of glow-worms as the secretive cousins of lightningbugs. They can be found from coast to coast, although they tend to be more prevalent in the West. I’ve encountered them only once, on a wet night camping in a Pacific Northwest Doug-fir forest—a few females beaming their soft lights up from the leaf litter.

As for the daytime dark fireflies, it is quite possible you have seen one of these before and not even realized it was a firefly! As their name suggests, daytime dark species are active during the day, so they have no need for bioluminescence. Instead, they use chemical cues called pheromones to attract or locate potential mates. One species complex, Ellychnia corrsuca, or the winter firefly, is among the earliest of fireflies to emerge each year, sometimes as early as February. This species overwinters on tree trunks as an adult and can survive temperatures below freezing. They are widespread across the eastern U.S., and other species of Ellychnia can be found all across the country. I’ve encountered them on late-spring backpacking trips in the Olympic Mountains of Washington and in the coastal forests of Oregon, typically resting on vegetation. They’ve even been reported from gardens, parks, and natural areas in urban areas like Portland.

Not all fireflies flash! Some, like this glow-worm (Microphotus sp.), glow, while others like the black firefly (Lucidota atra) are active during the day and don’t need light. (Photos from left: sirduckington [CC BY-NC] and Katja Schulz [CC BY 2.0].)

While fireflies vary quite a bit in their distributions, life histories, and behaviors, they have a few things in common: they all generally need moisture, safe places to live, and—for those that use luminescent courtship signals—dark nights. Recent assessments have shown that a number of firefly species in the U.S. and Canada are at risk of extinction due to habitat loss, light pollution, and climate change. Notably, a large percentage (over half of species assessed) were so poorly known that they could not be properly assessed. The assessments identified some key actions that need to be taken to protect and better understand fireflies, from coast to coast. I’ve highlighted three actions here to help you make a positive impact on the future of our firefly populations.

By considering the needs of fireflies, a pollinator garden can also provide healthy habitat for fireflies. (Photo: Justin Wheeler)

Habitat loss is considered to be the biggest threat to fireflies worldwide. Do you have access to a yard, garden, or natural space? If so, here are some steps you can take to protect and restore habitat for fireflies wherever you live:

2. Turn off outdoor lights at night

Turning off your outdoor lights at night will help ensure that fireflies can communicate with each other in the dark. (Photo: ZoranCto [CC BY-SA 2.0].)

Flashing fireflies and glow-worms communicate with each other using bioluminescent courtship signals. Light pollution has been shown to interfere with both the production and reception of these courtship signals, and has also been found to inhibit larval dispersal. The best way to help fireflies is to turn off any outdoor lights at night. But if this isn’t possible, then dimming lights, using red bulbs or filters, or minimizing the amount of time the light is on (by using a motion detector or timer, for example) are all good alternatives. You can read more about firefly-friendly lighting practices in our fact sheet.

Given the sheer number of firefly species (over 2,200 worldwide and 160+ and counting in the U.S. and Canada) and the huge diversity of lifestyles and habitats, it is perhaps unsurprising that we know relatively little about many of them. And although there have been many anecdotal reports of firefly declines from the US and abroad in recent years, we actually have very little data on baseline population sizes or trends. In fact, for many species, we aren’t entirely sure of the full extent of their range. Fortunately, several organizations have started community science programs to start answering some basic questions about firefly distributions and population trends. You can help scientists track firefly populations by participating in a dedicated firefly program, or simply by submitting photo observations to sites like iNaturalist. Photos are important, but if you report a flashing firefly occurrence, remember to include some information about its flash pattern. This will help with species ID, since so many flashing species can only be identified by a combination of location, flash pattern, and physical appearance.

There are many other actions you can take to help fireflies, but these are some of the most important ones. That said, if I had to pick a fourth, I would make it this: share the word about fireflies and their conservation needs! Even though fireflies are well-loved, many people do not realize that they need conservation attention. Fireflies occur in every state except Hawaii, which means there are a lot of opportunities to learn more about them and contribute to their survival. Check out the firefly records on iNaturalist and see what species occur near you, or pick up a field guide like Lynn Faust’s Fireflies, Glow-worms, and Lightning Bugs or Sara Lewis’ Silent Sparks. Even if you live in a place where flashing fireflies aren’t found, there are still many other firefly species that could use your help.

Read more about what fireflies need, the threats they face, and conservation efforts at www.xerces.org/fireflies.

For more information on conservation actions you can take, visit https://xerces.org/endangered-species/fireflies/how-you-can-help.

Quick read: Firefly Conservation: A Guide to Protecting the Jewels of the Night

Long read: Conserving the Jewels of the Night. Guidelines for Protecting Fireflies in the United States and Canada